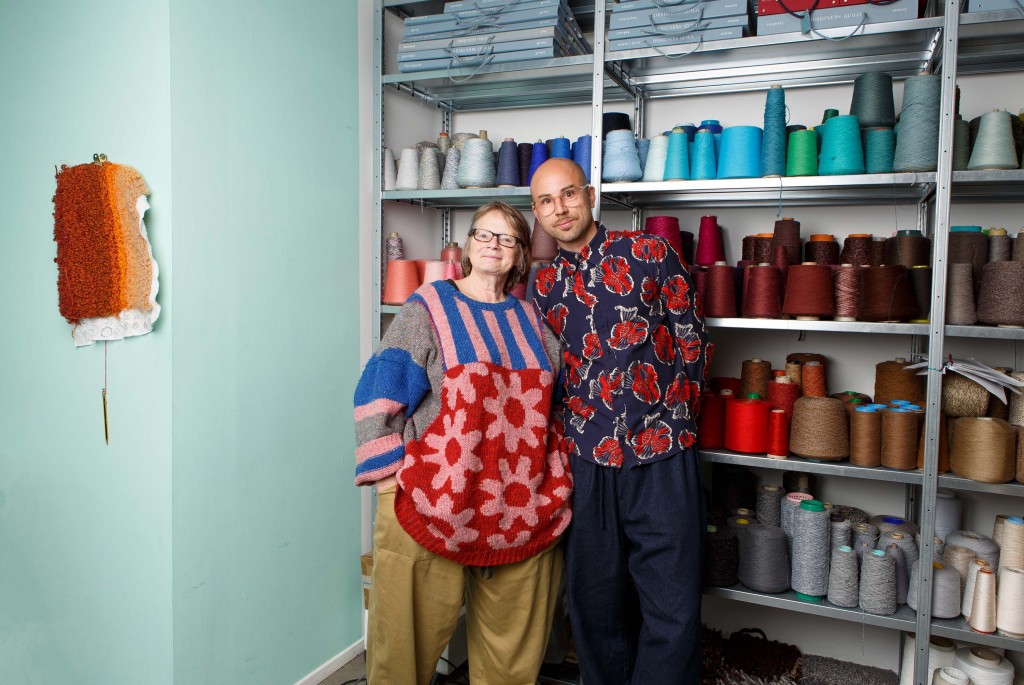 A jumper with a multi-coloured, knitted motif can look insidiously simple from the outside: a two-dimensional image, executed in wool. However, anyone turning such a jumper inside out will discover a complex web of criss-crossing threads. 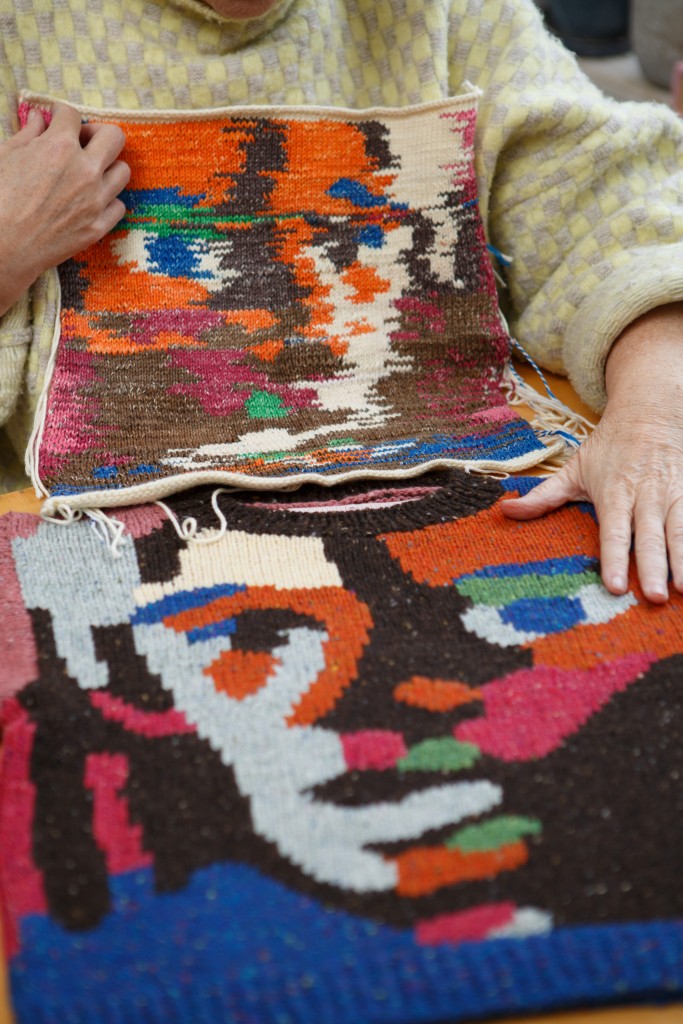 The technique used for knitting in motifs is called intarsia, and requires the knitter to work with multiple colours and thus with multiple threads simultaneously. This requires not only careful planning, but also oversight, to avoid tangling the threads. The technique is both complicated and time-consuming, and few knitters are truly adept at it.

In recent years, Joost Jansen and Loret Karman have been looking for a way to simplify the knitting of images and to make it more accessible. Jansen is the founder of the brand Survival of the Fashionest, which produces colourful hand-knitted jumpers by means of intarsia technique. Together with Loret Karman, a specialist in hand knitting and yarn dyeing, he developed an alternative process that requires only a single thread. If part of this process is delegated to machines, it could enable less experienced knitters to knit complex multi-coloured motifs in the future. 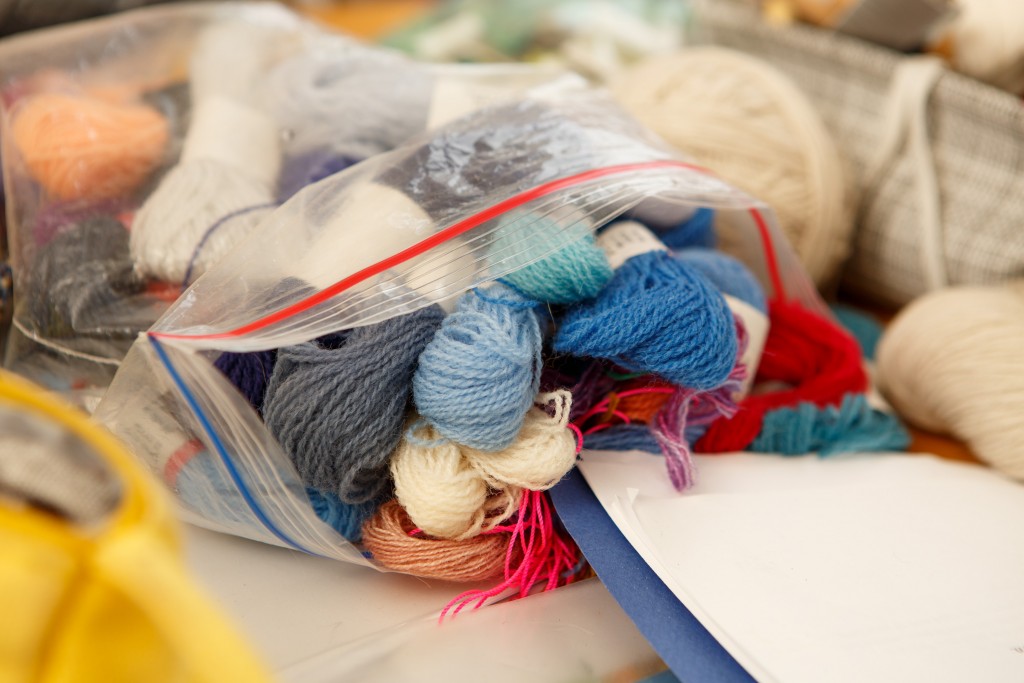 Jansen graduated from the Design Academy in Eindhoven in 2010 and went on to work as a graphic designer and production manager for clothing and textile companies. He worked at brands such as Walter van Beirendonck and Henrik Vibskov, labels known for their colourful, graphic aesthetics and striking knitwear. Those elements also characterise Survival of the Fashionest, which Jansen founded in 2017. The brand combines Jansen’s penchant for playful motifs with his inclination for natural materials and handcrafts. Jansen provided the designs from the start, but as he is – in his own words – a ‘pretty bad’ knitter, he had to outsource the actual intarsia knitting. This is currently done by a group of some 250 Bulgarian women he met through a contact at Henrik Vibskov.

In addition to the team of Bulgarian women, Jansen has for several years been working with a ‘technical team’ of top-notch Dutch knitters who elaborate Jansen’s designs and translate them into knitting patterns. At the helm of this team is Karman, who is a couture-level hand knitter and yarn dyer. She is also the initiator of De Amsterdamse Steek, an academy that organises knitting courses and workshops. 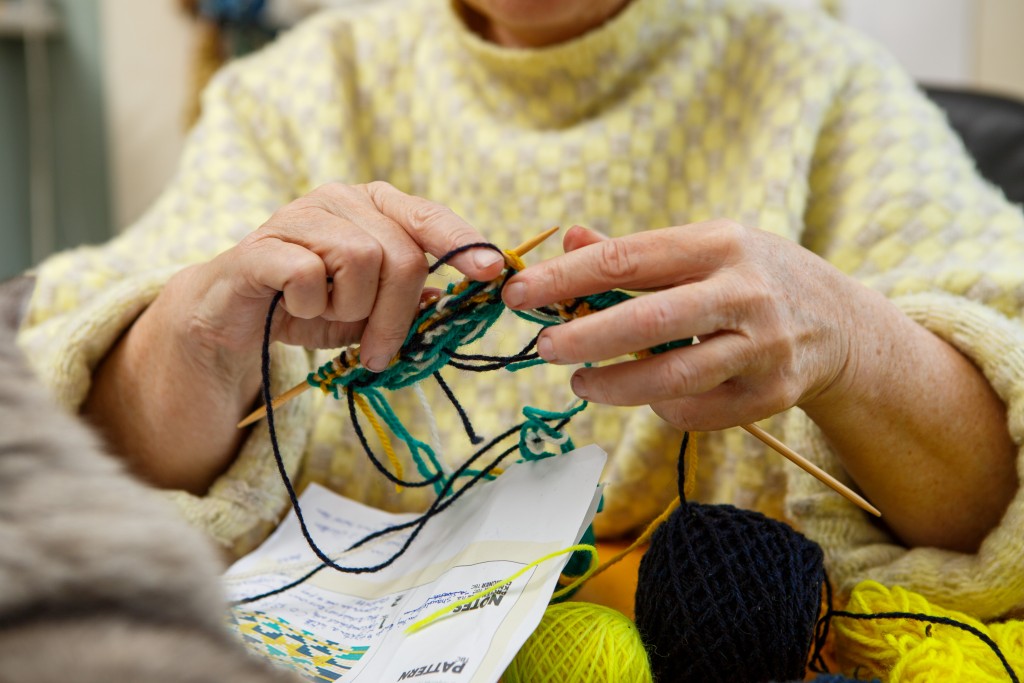 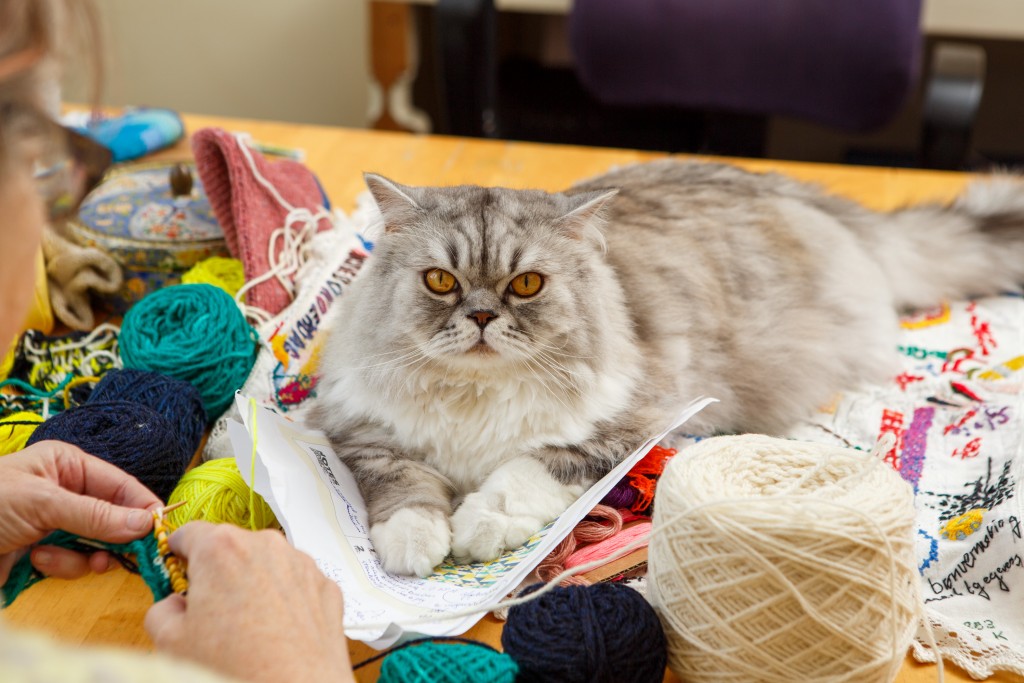 Any image, from the logo of your football club to a picture of your dog to Marilyn Monroe’s head, could be knitted into a jumper.

Karman was trained in knitting in the 1980s, when the intarsia technique was wildly popular. “Any image, from the logo of your football club to a picture of your dog to Marilyn Monroe’s head, could be knitted into a jumper.” Many of the professional knitters from that period have since quit knitting. Some of them picked it up again at a later age, but mostly for pleasure, Karman says. Several continued their training and became high-level knitters, like Karman herself. However, do not always make jumpers for others anymore, whether individuals or brands. “Far too costly,” Karman says with a smile.

Hand knitting has been picking up in recent years, Karman observes, thanks in part to the internet, which facilitates easy sharing of knitting patterns, tips and examples. Numerous YouTube tutorials show knitters explaining intarsia to spectators, with or without use of clever tools for the handling of multiple threads. Even so, the technique is a headache to many knitters, says Karman. Moreover, intarsia remains time-consuming, even for those who have mastered it: the Bulgarian knitters that work with Jansen need roughly three weeks to knit an average jumper. For Jansen, communicate the complex patterns clearly to the team of knitters also poses a challenge. Ever so often, something gets lost in translation. 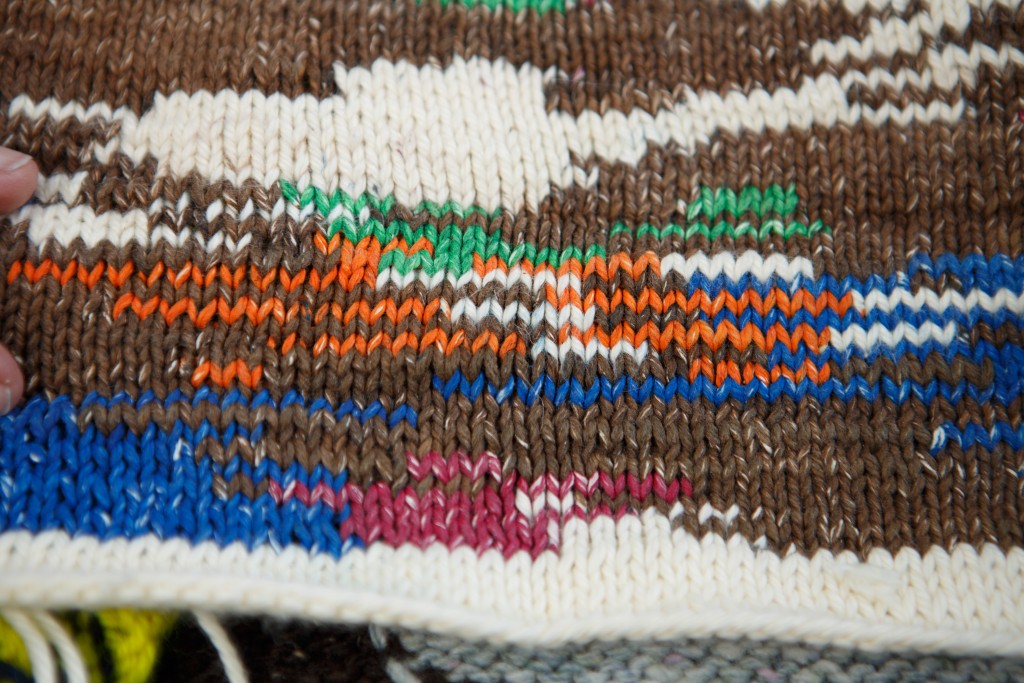 Jansen came up with the idea to move the development of the image to an earlier stage of the making process. Karman: “The idea was to pre-dye the image onto a single ball of yarn. That would make the communication between Joost and the knitters a lot easier. Then he could just say: put on eighty stitches and knit twenty centimetres – the image would appear automatically.”

Karman saw another advantage. “If you are not a first-class knitter but you want to knit a football club logo into a scarf for your cousin, this process would allow you to just buy a single ball of wool and finish the scarf before Christmas, so to speak.” The technique, they believed, would also make the knitting of images accessible to a wider group of amateur knitters.

The idea was to pre-dye the image onto a single ball of yarn. 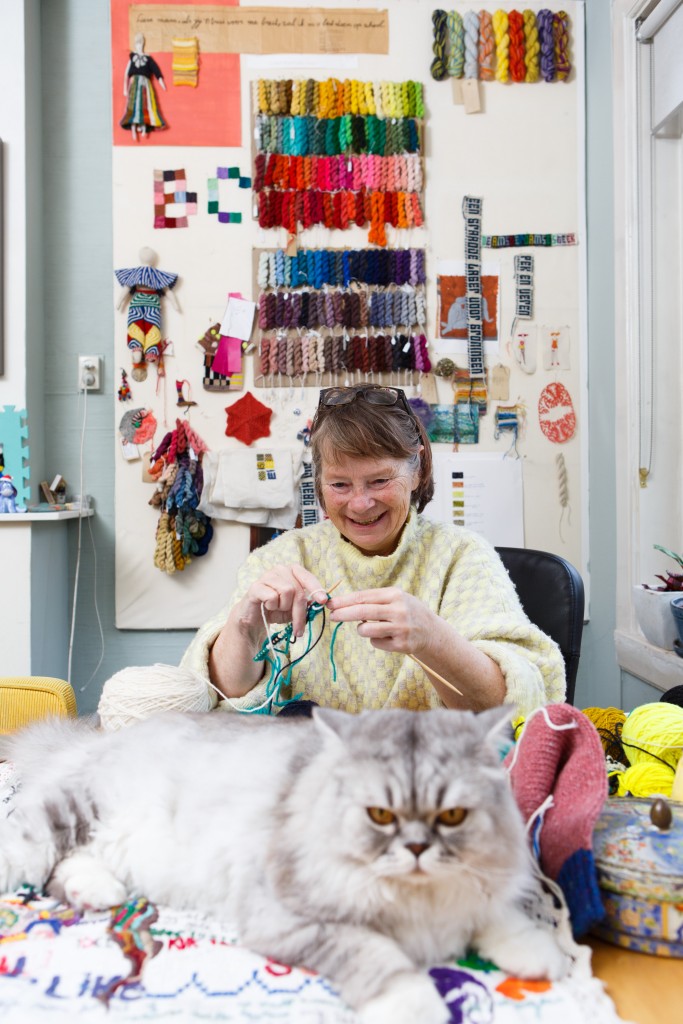 Karman and Jansen chose an abstracted image of a face, derived from artist Young Park, for their first sampler. Then came the maths. Jansen and Karman made a pattern of the motif and figured out which stitch in the sampler would correspond to which colour. That pattern was translated into a dye scheme based on a length of 1.75 centimetres of yarn per stitch. For the sampler, the yarn was dyed by hand, but in the future it could possibly be done by machines to deliver the yarn to knitters faster and ready-made.

Karman and Jansen conceived the project together, but divided the knitting and dyeing between them. “Joost is not actually a knitter,” explains Karman, “but he usually has a role on the conceptual side of things, and wanted to work on the execution for a change.” Jansen was made responsible for dyeing the yarn. It took him about 58 hours, over seven working days. Karman: “Pre-dyeing the yarn turned out to be a lot of work, so it would be good if that could be done mechanically.”

You have to be a ridiculously good knitter if you want to keep control of the thread.

Karman knitted the sampler, which after fifty hours of knitting measured 35 by 33 centimetres. While knitting, Karman realised that the process was nowhere near as easy as previously thought – quite the opposite, in fact. “You have to be a ridiculously good knitter if you want to keep control of the thread. I knitted with the pattern next lying next to me, and even I deviated two stitches in every row, compared to the pattern. Instead of it being suitable for less experienced knitters, you actually have to be better at knitting to do it.” 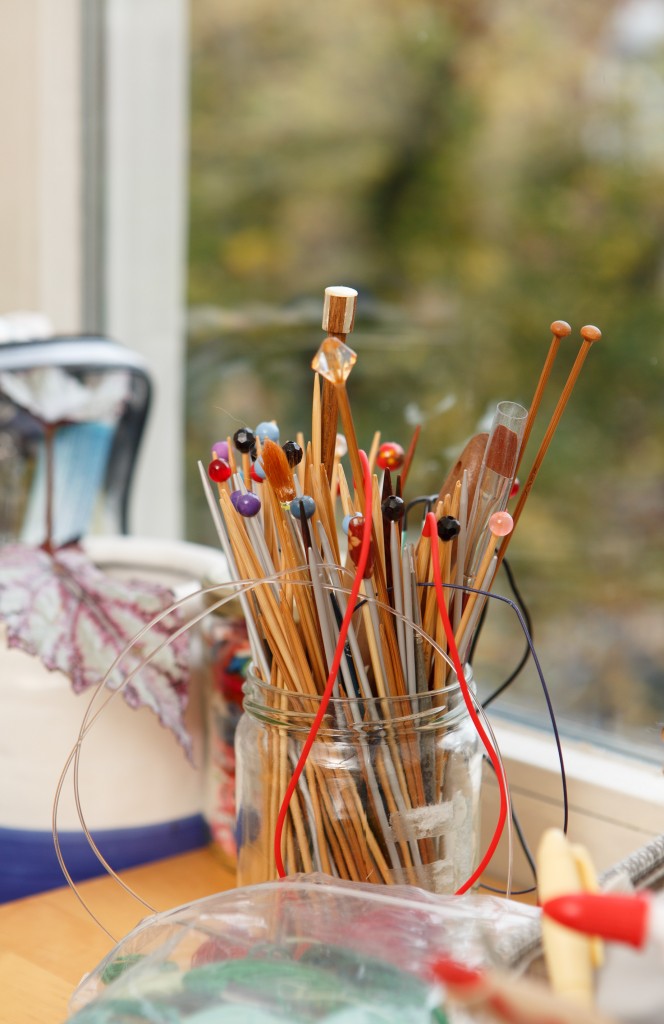 In its current form, Karman and Jansen’s process does not make the knitting of images easier. This is also evident from the resulting sampler, that shows a slightly distorted image of a face. At the same time, it is still clearly recognisable as a face. This shows that, at least, there are opportunities to be explored.

Karman and Jansen are currently in talks with a Israeli spinning mill that could pre-dye the yarn using a computer-controlled machine. Dyeing could then be done faster and more precisely, and small markings could potentially be applied to the yarn which Karman believes could make it easier for hand knitters to knit consistently.

Mechanically dyeing the yarn might open up possibilities for makers to design their own multi-coloured, patterned jumpers. Karman: “You could design your own pattern, send it to the computer and have the yarn delivered according your size. Then you could hand-knit the jumper yourself.”

Knitting could also be done by machines in the future. Knitting machines can already knit intarsia now, but Jansen and Karman’s method may speed up the process and potentially economise it. Currently, when machine-knitting intarsia, material is lost in the form of underlying threads that are not visible on the outside of the jumper, or in the weaving in and out of different colours of yarn. When it comes to mechanical production of knitwear, there is a lot to learn from crafts.

A jumper that you made yourself, or a jumper that someone else has made for you, you connect to in a particular way.

Still, Karman and Jansen focus mainly on hand knitters. Karman: “A jumper that you made yourself, or a jumper that someone else has made for you, you connect to in a particular way. It’s not about having a new jumper every year, it’s about having a very nice jumper that was designed and knitted especially for you. You will look forward to wearing with every winter.” 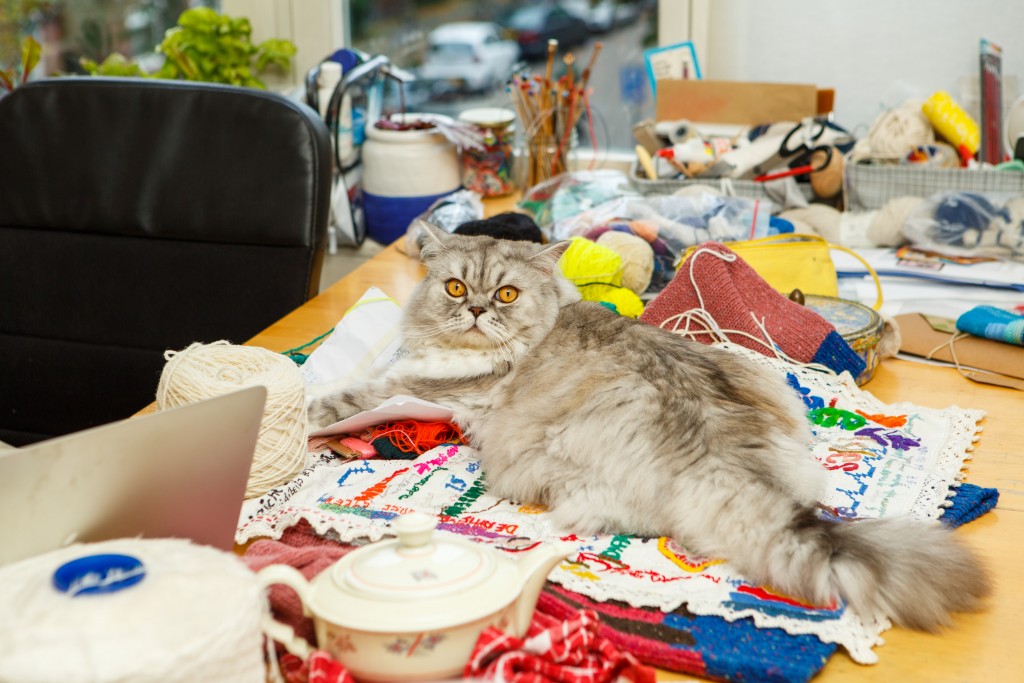