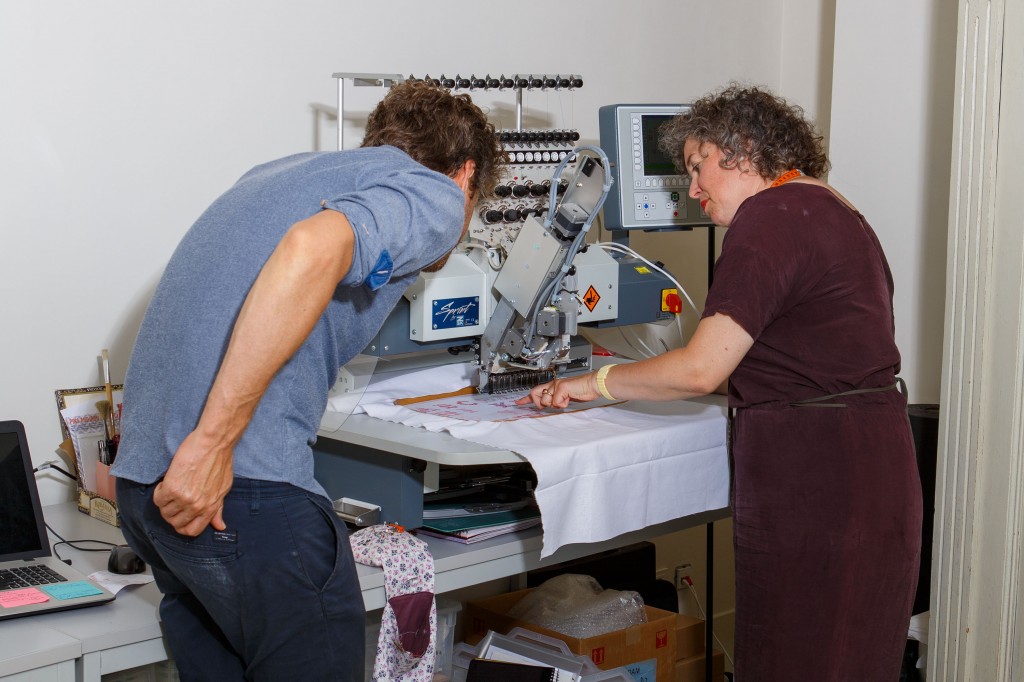 In recent years, embroidery expert Martine van ‘t Hul has increasingly been working with a computer-controlled embroidery machine. It enables her to work more efficiently and to complete larger orders. But when using an embroidery machine, something is also lost: the manual touch that makes hand embroidery so attractive and, by extension, the creator’s own handwriting.

However, does an embroidery machine not have a handwriting of its own? What if the machine’s limitations open up new possibilities? These questions are not only relevant to Van ‘t Hul, but were also on the mind of graphic designer Daniël Maarleveld for some time. As part of Crafts Council Netherland’s incentive programme, Maarleveld and van ‘t Hul jointly developed a typeface based on the logic of the computer-controlled embroidery machine. By magnifying this logic, the machine’s own distinctive hand of working is revealed. In this way, Van ‘t Hul and Maarleveld advance a manual tradition by means of machine. 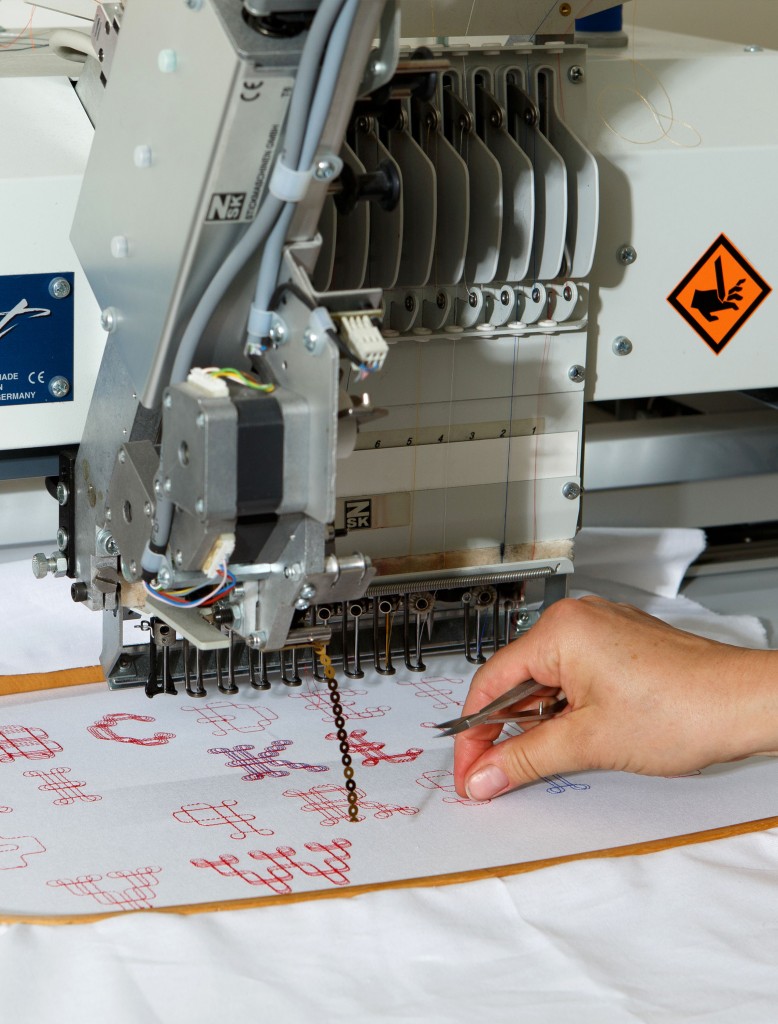 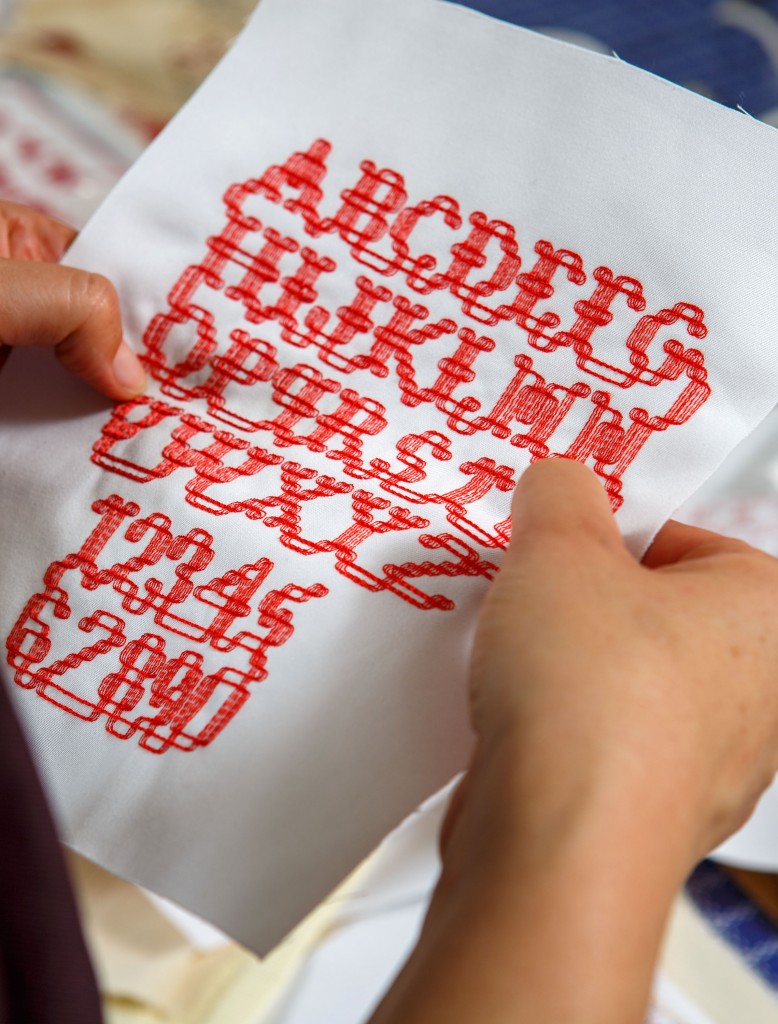 Van ‘t Hul learned embroidery from her mother at a young age and became hooked on it. She studied fashion design at the Hogeschool voor de Kunsten in Arnhem, now known as ArtEZ, and invariably incorporated embroidery into her collections. “There was lots of embroidery in my graduation collection as well. I noticed at the time that I actually liked the embroidery part a lot more than the other aspects of the collection,” she says. After her graduation, she worked for various fashion houses. “However, at some point I chose to focus only on embroidery. That’s where my heart is.”

However, at some point I chose to focus only on embroidery. That’s where my heart is. 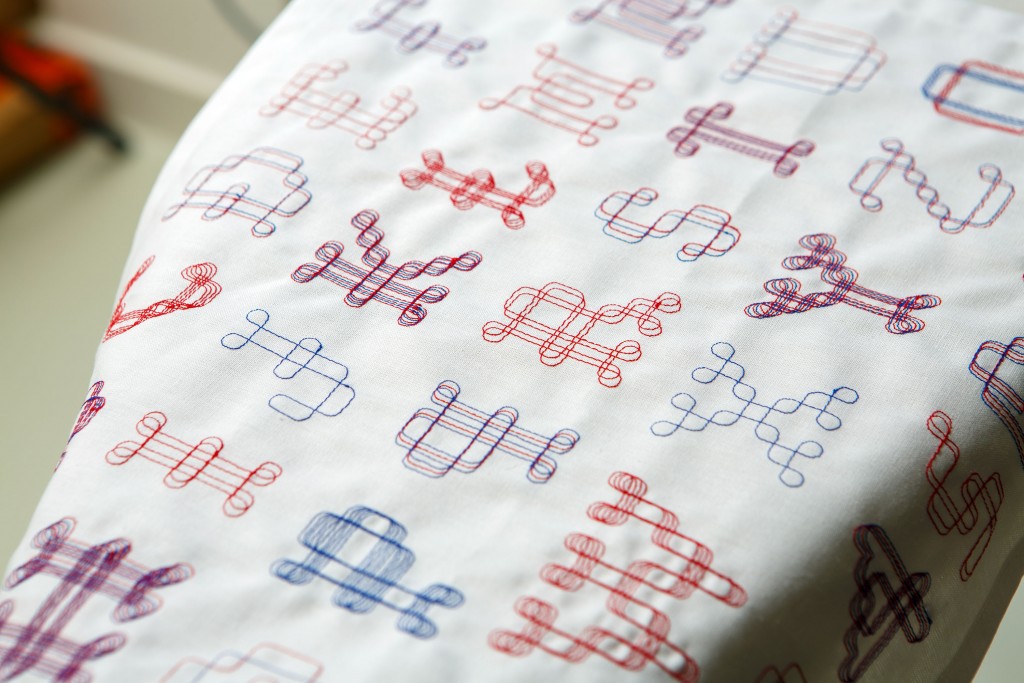 In 2011, she suddenly got access to a five-thousand-euro embroidery machine through her partner’s company. Van ‘t Hul was a bit reluctant to work with it at first, she says. Laughing: “It was a fifty-thousand-euro machine, that fact alone made me nervous.” But the machine offered her an important advantage: realising bigger commissions, which could provide her with an income. “Manual work is too expensive for many clients. At one point, I thought: the handwork is nice and all, but it’s not entirely in tune with the times, because I can’t actually make a living from it.”

Working with the embroidery machine did turn out to be very different from hand embroidery. “When I work by hand, creation comes naturally. I sit down with threads, fabrics and an idea. I automatically get into a kind of workflow. When embroidering by machine, you have to have a plan beforehand, which you work out in the computer. Then you convert the design into embroidery stitches so that the machine can embroider it. I really had to get used to that level of planning.” The character of hand embroidery, she finds, is a challenge to emulate by machine. “Especially machine embroidered letters tend to look very standard, and very… Insensitive. Really different.” 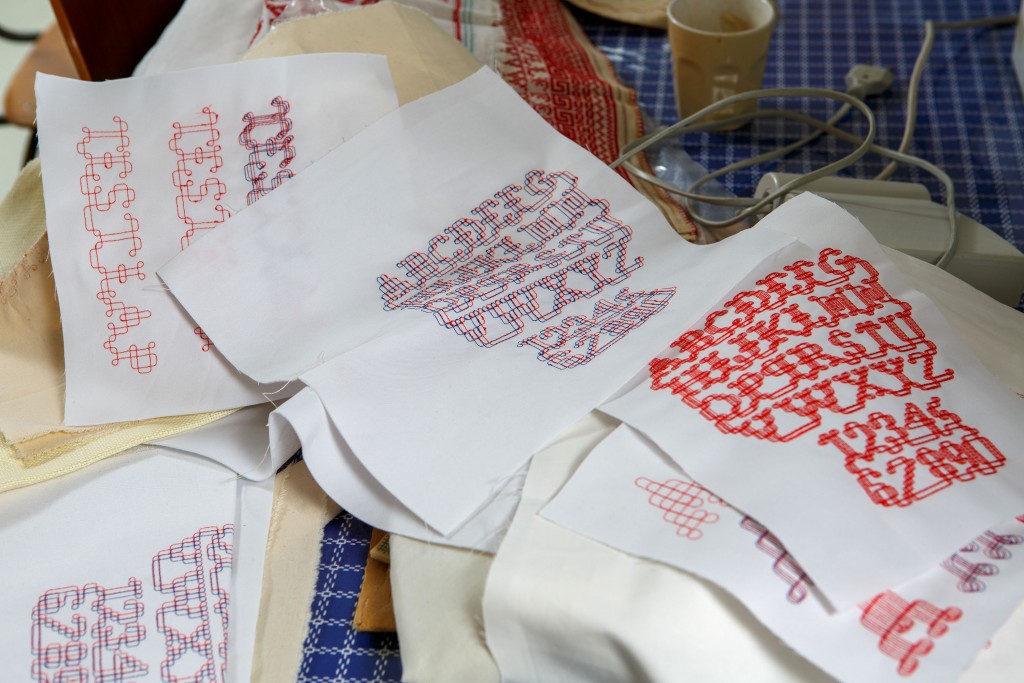 Van ‘t Hul had been considering how to translate hand embroidery to the machine for some time, when she met Maarleveld during the incentive programme. Maarleveld, for his part, tries to uncover the handwriting of machines in his work as a graphic designer, in order to show the ‘soft’ sides of machinery. He remembers exactly when that interest was spurred, he says. “When I was eighteen, I did an internship with someone who exported images from a website via a computer script. He would just lean back and wait. He let the computer do the work. That inspired me to create increasingly complex designs with the help of the computer.” It became a common thread during his studies at the Gerrit Rietveld Academy. “I found it fascinating to force the computer to make creative choices, because I would be surprised by the outcome. You can actually create something yourself that you could never have imagined.” For Maarleveld, this offered “an escape from existing design styles and the associations already attached to them,” he says. “Computer-generated design was an area where there was still a lot to discover, there was no clear point of reference. I found that very interesting.”

I found it fascinating to force the computer to make creative choices, because I would be surprised by the outcome. 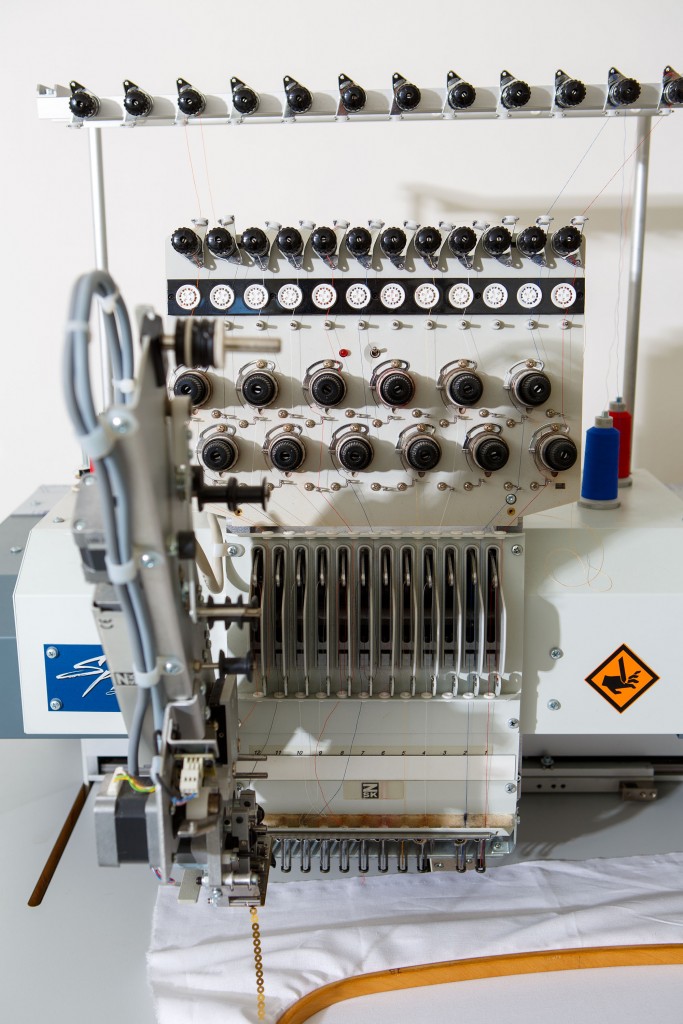 Maarleveld and Van ‘t Hul were paired by Crafts Council Nederland. Maarleveld: “Martine wanted to make the translation from handwork to machine, I wanted to make an analogue product in which the handwriting of the machine was visible. Our starting points were different, but there was mutual understanding.”

Initially, Maarleveld in particular wanted to stay away from letters, he explains. “I already work with typography a lot. Besides, at first, I saw the project as an experiment in form: I was curious to see how the computer would convert embroidered colour schemes or images, and what it would look like if we would run them through the embroidery machine again.” The two began by translating images into embroidery stitches, working from individual pixels or image outlines. Maarleveld: “The results were beautiful, but for viewers it was unclear what our input had been as creators.”

What the two did take away from their experiments: the embroidery machine invariably converts images into a standard embroidery pattern. The search for a way to integrate their own handwriting into the embroidery software brought Van ‘t Hul and Maarleveld back to designing a font. As a starting point, they chose the sampler, a test cloth on which embroiderers practice various motifs or fonts, usually in cross-stitch. Maarleveld: “We also wanted to do a lot of testing, to explore the translation from analogue to digital, and back to analogue.” 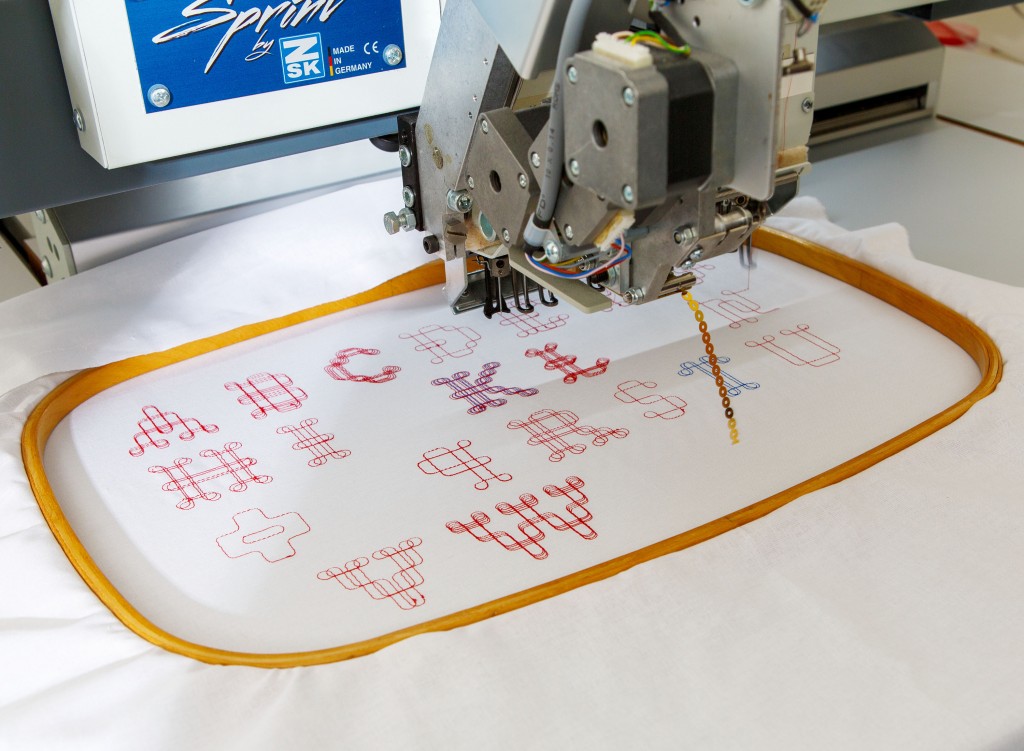 Maarleveld and Van ‘t Hul started by converting cross-stitch letters to abstracted letters on the computer. This resulted in a pattern that proved difficult for the embroidery machine to execute. The letters consisted of squares, which the machine could only fill in by stitching lots of short lines parallel to each other. Van ‘t Hul: “This could actually be done faster by means of manual cross-stitch. It didn’t exactly reflect the logic of the computer.” The duo then started working with a letter based on the outline of the cross-stitch letter.

Maarleveld: “The reference to the cross-stitch letter was kept, but was more in line with the logic of the machine.” Van ‘t Hul and Maarleveld developed several variations on this letter. For instance, they made a version of the letter with double lines, purely to challenge the machine. “We did that on purpose. The lines run parallel to each other, they almost touch, but not entirely. We noticed that the machine is in fact unable to stitch this without flaw. With our font, we give the machine no option but to ever so slightly fail.” 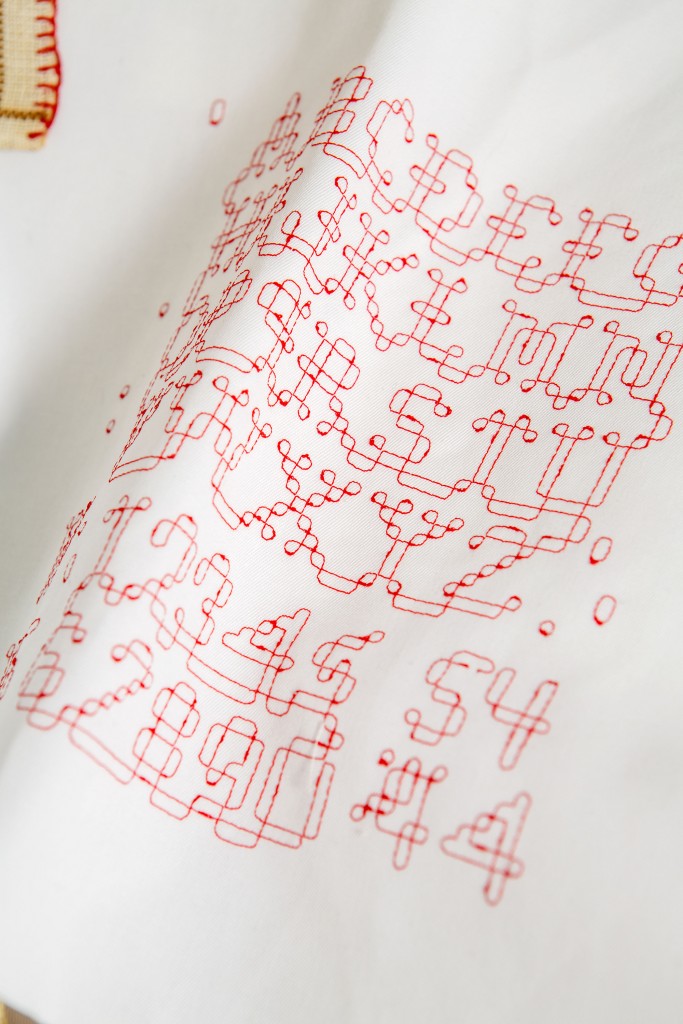 In the collaboration, Maarleveld was mainly responsible for converting images into designs for the machine, and Van ‘t Hul for execution on the embroidery machine. Together, they reflected on the analogue and digital results. In fact, the computer and especially the embroidery machine acted as additional collaborators. Maarleveld: “Sometimes a computer or machine does exactly what you want it to do, and sometimes it doesn’t. That can be irritating. We really had to get to know the machine better. I found out, for example, that my conception of the machine wasn’t exactly correct. Sometimes I would design something that the machine couldn’t execute efficiently at all. Then Martine would come back to me saying: ‘Nice design Daniël, but now that machine has to run for four hours.'”

In her collaboration with Maarleveld, Van ‘t Hul felt ‘provoked to get more out of the software’. “That’s why I enjoyed doing this project so much. Some obstacles I might have avoided on my own, I’m not that software-minded. But ultimately I have to make do with the machine, so it was good to examine it further and explore its boundaries.”

On the computer, it really is a different letter, very smooth and sleek. It is precisely the conversion to textile, where you can see the machine-made ‘mistakes’, that gives the letter its subtlety.

The result of the collaboration is a new sampler, showing the letter developed by Maarleveld and Van ‘t Hul. Van ‘t Hul: “Just like a traditional sampler, we use this to show the different possibilities of the technique.”

The letter exists only on textiles. Maarleveld: “On the computer, it really is a different letter, very smooth and sleek. It is precisely the conversion to textile, where you can see the machine-made ‘mistakes’, that gives the letter its subtlety.” When Van ‘t Hul looks at the letter, she feels “the nostalgia of a real sampler,” she says. “Sure, when you get closer you see that this one is machine-made – so maybe that nostalgic feeling owes more to the design than the execution. At the same time, in many ways, machine work is also a handcraft. The result depends on what kind of yarn I put on the machine, what kind of fabric I put underneath, what kind of fabric it is, et cetera. It’s not just a matter of pressing a button.” 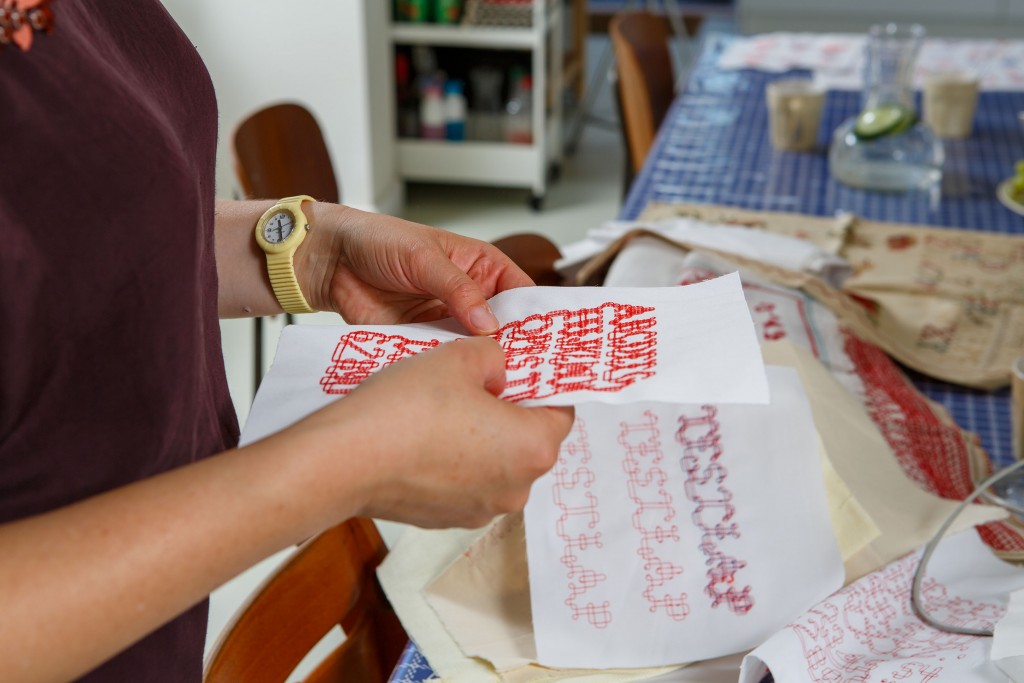 With the sampler, Van ‘t Hul and Maarleveld want to demonstrate how embroidery machines can be used in a different way. Meanwhile, they are picturing what they could do with the letter and the knowledge gained about the machine and its ways. Van ‘t Hul: “This could become a system to mechanically customise clothes using our letter, or a personal design. Technology for the future, so to speak, involving elements of tradition.” 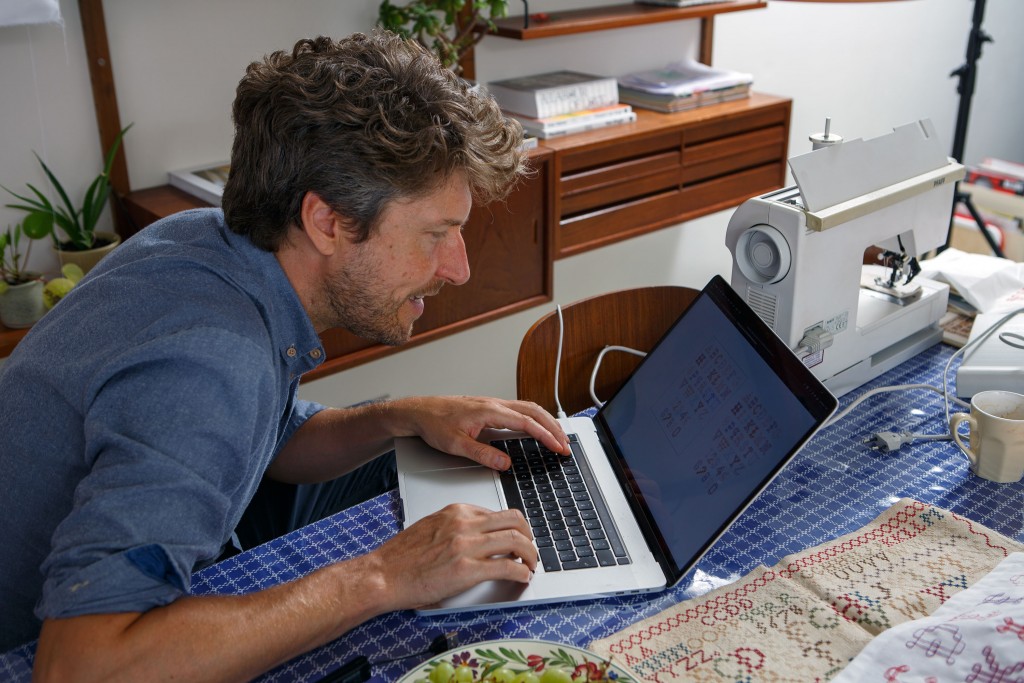