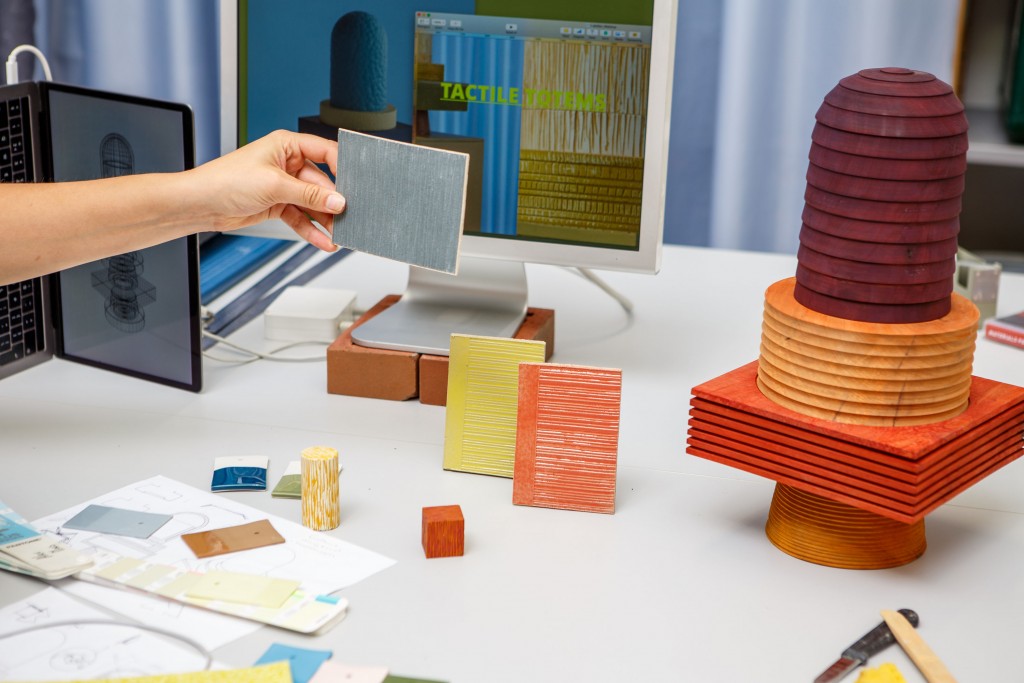 At first glance, Nina van Bart’s ‘Tactile Totem’ looks like it could be a sculpture, a puzzle, or a model for a building. It comes across as a carefully constructed whole, built up of four shapes. At the same time, each shape is interesting in its own right, in terms of colour, texture and material.

The ‘Tactile Totem’ is a concept by Van Bart, designer of objects, surfaces and settings for interiors and architecture. Van Bart makes one totem every year as a means of material research. Each time, she uses different materials, colours and treatments, examining their characteristics by applying them to four architectural shapes: the box, the cylinder, the cone and the dome. Gradually, Van Bart builds a personal knowledge base consisting of resolved experiments.

This year, Van Bart wanted to make a ceramic totem. At the same time, she felt a need to explore ways to produce the totems more efficiently using digital techniques. Together with 3D designer Roel Deden and product designer and ceramist Marieke van Heesbeen, Van Bart found a way to do both, which proved to be not just efficient but also artistically rewarding for every member of the team.

Making the totems usually is quite labour-intensive. 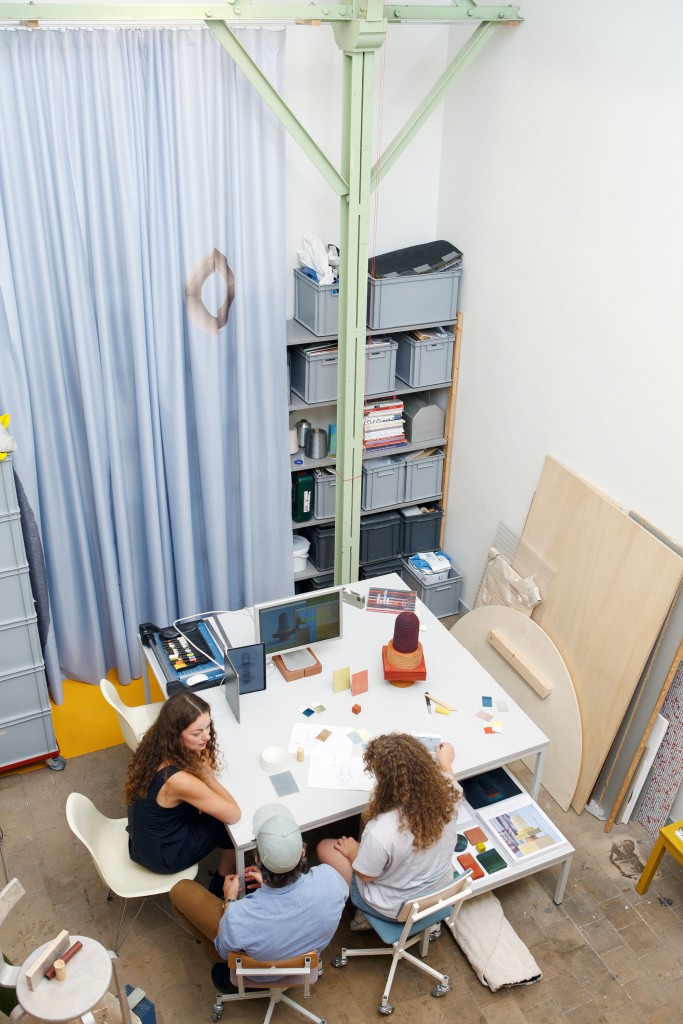 Making the totems usually is quite labour-intensive, Van Bart explains. Firstly, it requires extensive research into possible structures and textures as well as colour combinations. In addition, it necessitates the repeated production of physical mock-ups, a process that is not only time-consuming but also financially costly. “This time, I wanted to do it differently,” says Van Bart.

Van Bart first met Deden at the Design Academy in Eindhoven. She graduated as a designer of objects and materials, he trained as an engineer of digital concepts and visualisations. After his academy years, Deden specialised as a procedural designer: he sets up systems that other designers can use to digitally produce models and modify them. Several years ago, Van Bart and Deden started working together as members of Neo Design Collective, a multidisciplinary design and innovation collective focusing on the materials industry.

Deden and Van Bart applied for the incentive programme of Crafts Council Nederland with the aim to digitise the totem making process together, while developing new digital tools to parametrically render different shapes, colours and textures. These could be employed to create digital models for Van Bart’s totems before physically executing them. In addition, digital modelling would allow them to directly 3D-print master moulds, which could in turn be used to develop plaster moulds for casting ceramics. 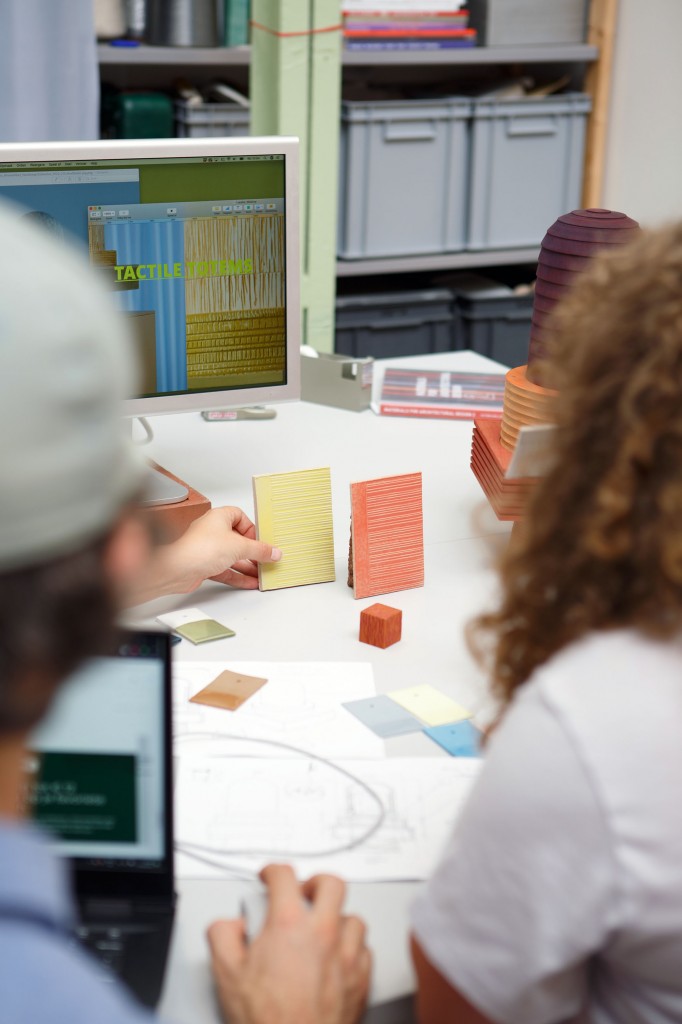 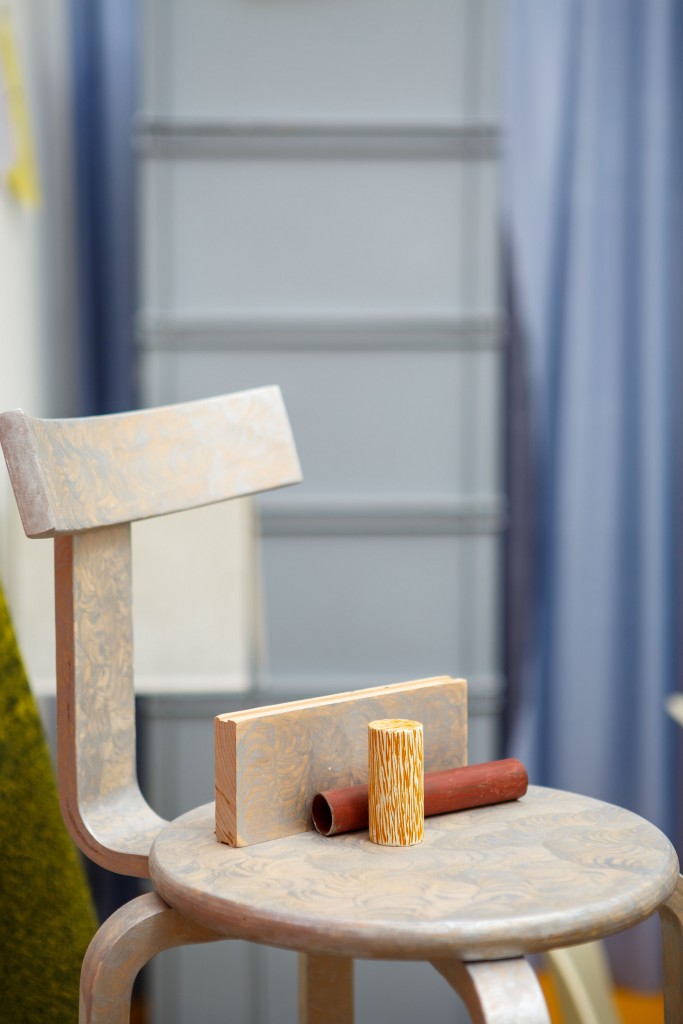 Deden began by developing a digital programme to visualise and edit the totem models. This made it easier to test different totem variations. The programme could save Van Bart a significant amount of work. Van Bart: “Suppose I were to make a mock-up entirely by hand. If I dislike the result, I have to manually produce a new one. That takes a lot of time, and even then there is no guarantee that the result will actually be better. On the computer, I can indicate what I would like to change and render it in seconds, so I can quickly assess whether something is likely to work or not.”

Apart from shape, colour and texture, however, there is a fourth aspect at play when making the totems: the behaviour of materials, in this case, ceramics. Ceramics are difficult to render in parameters. They are relatively incalculable: they have breaking points that are hard to accurately predict and can change shape in unexpected ways while curing.

Fortunately, Van Bart and Deden could depend on the expertise of Van Heesbeen. Van Heesbeen studied Product Design at ArtEZ and subsequently specialised in ceramics. She works at the intersection of art and design, exploring the boundary between autonomy and function. Similar to Van Bart, she likes to work with separate forms that she assembles and reassembles to create objects. Her studio, too, houses a library of shapes and samples which she uses to experiment. Hers are casted in porcelain. 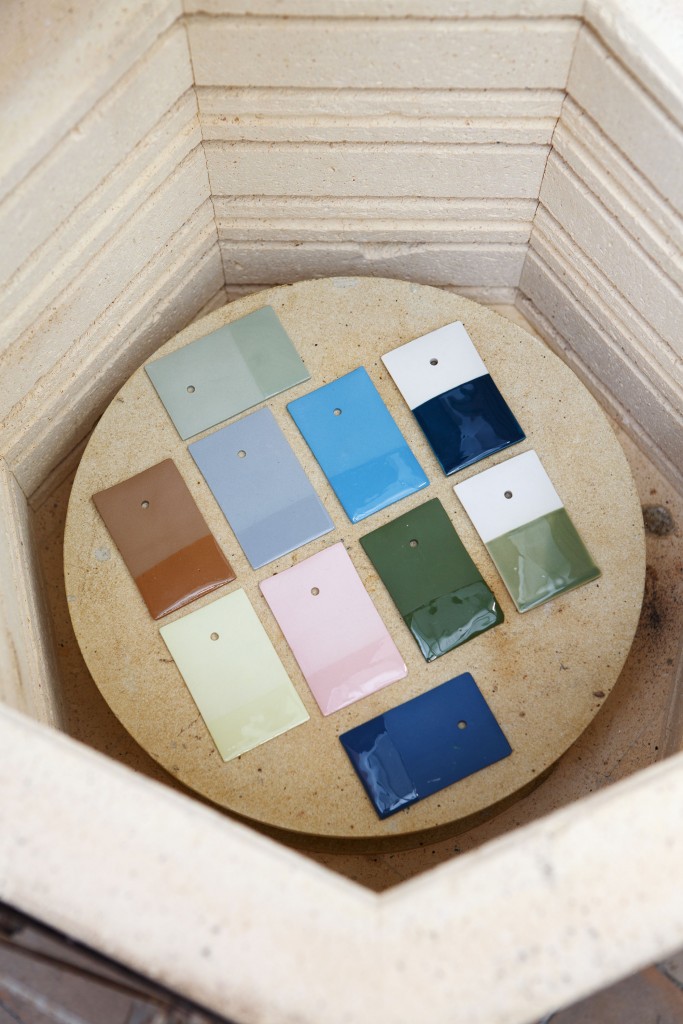 Looking at the virtual totem models on the computer, Van Heesbeen could immediately identify construction issues. Van Heesbeen: “I could point out things that I knew would work well for ceramics, and things that would pose problems. Making a rectangular box with a flat lid, for instance, is difficult in ceramics: the lid could collapse during execution. We could anticipate on those things this way.”

The use of digital technology to anticipate on results did not erase failures or disappointments from the process. Van Bart: “Especially in the beginning, you often don’t know exactly what the outcome is going to be: colours that work well on a computer might work differently when applied to actual ceramics.” Computers and materials are not only tools, but also collaborators: the better you get to know them, the easier the work becomes, Van Bart argues. “The larger knowledge base gets, the better you get at predicting results. And mistakes are sometimes useful too: they can surprise you and spur new ideas.”

Van Bart, Deden and Van Heesbeen decided on the final shape of the totem together, each from their own expertise. In the process, digital technology not only used for the creation and visualisation of models, but also to facilitate online feedback sessions. During these sessions, Van Heesbeen, Deden and Van Bart would use interactive 3D software that allowed them to simultaneously look at one and the same three-dimensional model while sitting at their own computers. They could rotate and flip the model on the screen and point things out using their cursors. 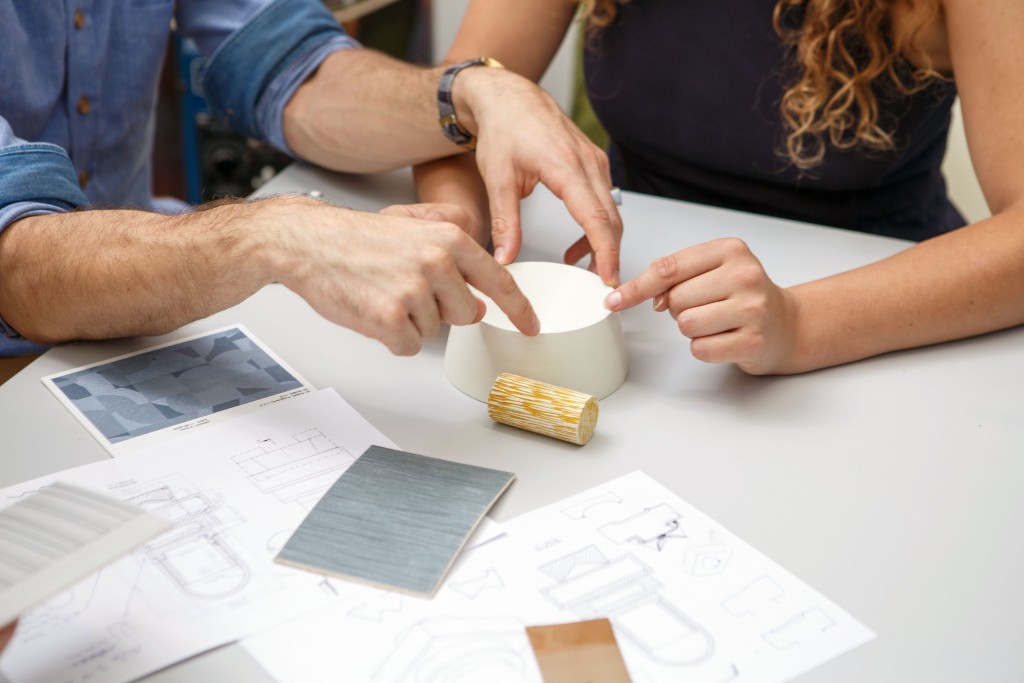 Based on the final model for the totem, 3D-printed master moulds were produced and used to develop plaster moulds to cast the totem. The resulting totem consists of a beam on a cone, topped by a cylinder and a dome. It is glazed with warm, slightly blended colours and a structure that changes across the shapes, from overlapping planes to ridges.

The parts of the process that I find most laborious are eliminated.

Apart from a physical totem, the process provided Van Heesbeen, Deden and Van Bart with new insights. For example, the digital visualisation of models and 3D printing of moulds turned out to be useful Van Heesbeen as well as for Van Bart. Van Heesbeen: “Currently, when I design for a client and I need to visualise it, I start by stacking shapes from my archive. I then take photos, which I upload to Illustrator to manipulate the design. Then I carve a plaster mock-up. In the future, I could send Roel a drawing and he could translate it to a virtual 3D model. That saves a huge amount of time.” It also makes the process more fun, Van Heesbeen and Van Bart agree. Van Bart: “In fact, the parts of the process that I find most laborious are eliminated.” Van Heesbeen adds: “It allows us to focus on the artistic side of things.” Deden, for his part, learned a lot about the programmes and systems he uses. “I can convert that knowledge into tools that others can use as well.”

I used to frequently meet people who were reluctant to get into ‘all that digital stuff’. But once they see what it can do, they usually get more excited. 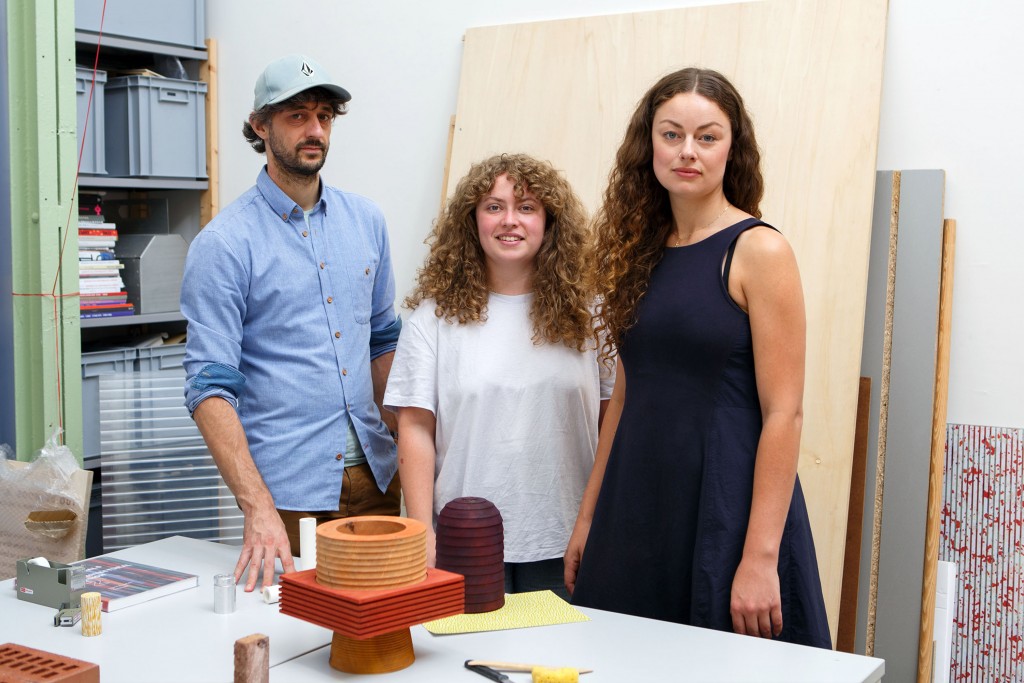 For Deden, Van Bart and Van Heesbeen, the physical totem functions primarily as a case study to demonstrate how physical and digital knowledge and techniques can tie up in a new working process. They believe it could serve as an example to makers and producers in the future. Deden expects that projects like these help physical makers see the value of 3D programmes, he says. “I used to frequently meet people who were reluctant to get into ‘all that digital stuff’. But once they see what it can do, they usually get more excited.” Van Bart: “Finally, our experiments in material, colour, shape and structure can also be a source of inspiration for makers in other disciplines, such as industrial, graphic or fashion design.”