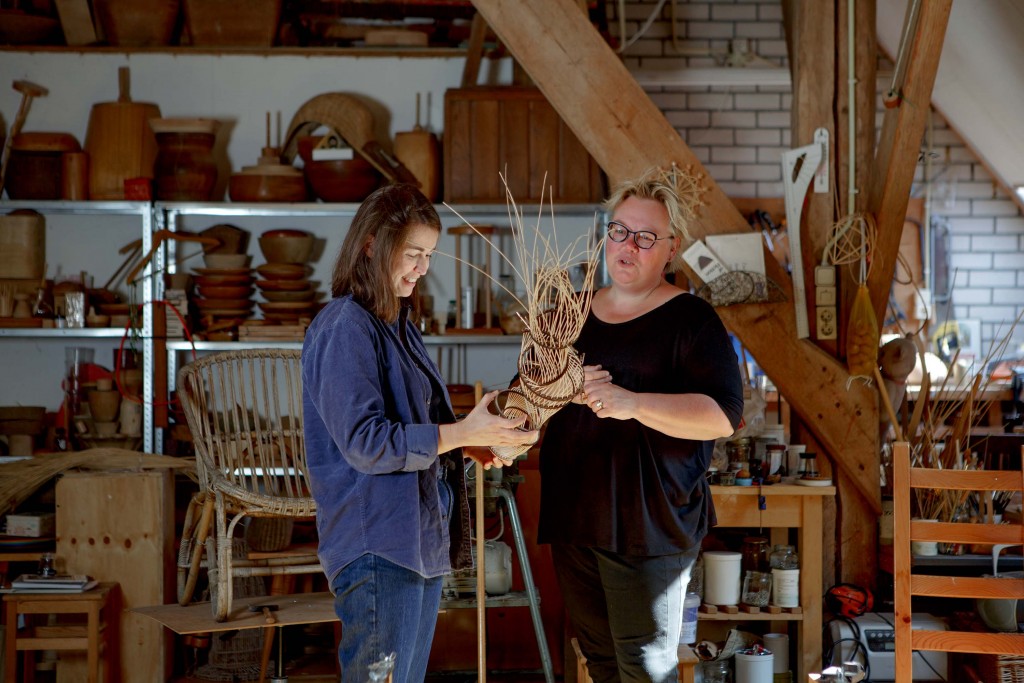 The technique of basket weaving is usually transmitted from teacher to apprentice by hand. In this particular learning process, tactility plays a major role: only feeling and testing by hand allow the maker to get a grip on the intrinsic tensions of natural basket weaving materials such as willow or rattan.

Basketry specialist Esmé Hofman and designer and researcher Amandine David are both interested in the process of knowledge transfer from the perspective of their own discipline. How are knowledge and experience transmitted nowadays, at a time of increasing digitalisation, and how are implicit knowledge, bodily experiences and understanding of materials preserved in the process? In an exchange of craft and digital techniques, Hofman and David developed tools that make basket weaving more accessible and invite makers to engage with it in a more creatively and autonomously, in a way that allows both body and material to speak. 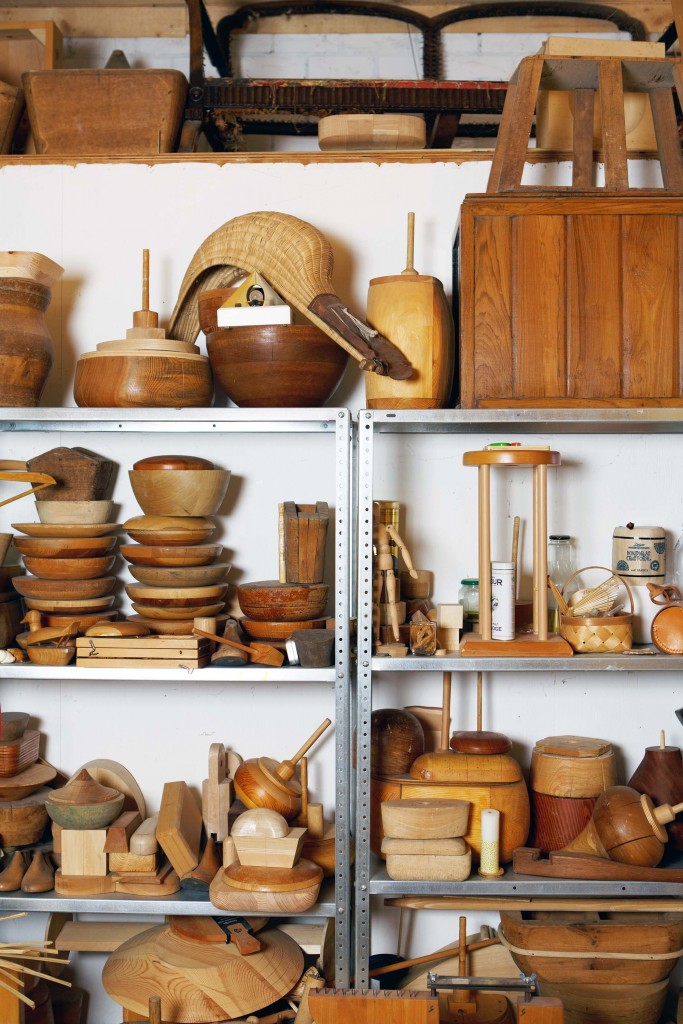 Hofman is one of very few traditional basket weaving specialists in the Netherlands. After a year of attending workshops in her home country, she did a four-year course in basket weaving in Germany, where she became captivated by the craft. She learned ‘the ins and outs’ of different techniques, she says, from working with willow rods to delicate skeinwork. She continued the learning process in her own studio in Wapse, Drenthe, where she weaves new objects in collaboration with designers and artists and or restores existing objects for museums and private clients. She also has her own line of work which contains both functional and non-functional objects.

I realised that what I thought of as an opposition was actually more like a history of evolution.

Like Hofman, David began her career in physical crafts. She trained as a product designer in France and explored various techniques, including weaving. Part of her training included working with computers and machines, but she initially disliked them, she says. Digital technology was diametrically opposed to her idea of craft. At the time, her mentors jokingly called her a Luddite, after the members of the social movement that rebelled against the introduction of automated textile machinery during  the Industrial Revolution. David accepted the nickname, until she delved into weaving at the Design Academy and discovered that weaving technology is, in fact, the basis of contemporary computation. “I realised that what I thought of as an opposition was actually more like a history of evolution,” she says. “It made me rethink my definition of craft.” 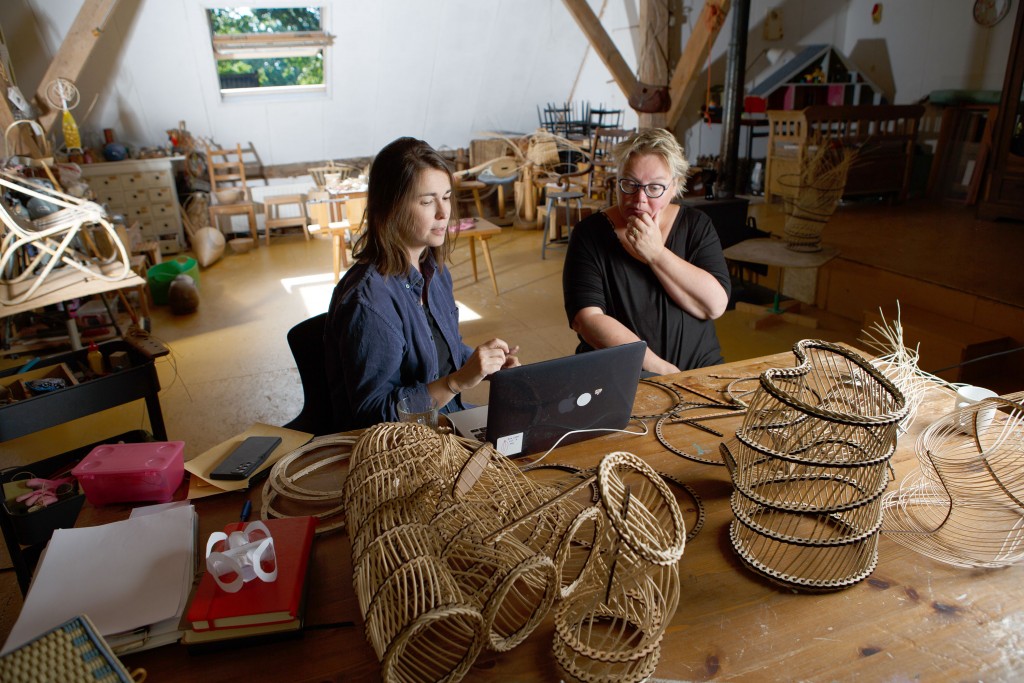 David and Hofman met during a workshop on coiling, a construction technique that exists in basket weaving as well as ceramics, David’s interest at the time. The two did a project together with a 3D-printing engineer, Joris van Tubergen,, developing new tools and hybrid objects in-between basket weaving and 3D printing. During that project, it became clear how similar their interests were. David: “Esmé told me at the time that she never makes the same object more than two or three times, because after that, it gets boring. For her, craft is not about producing objects, it’s about the technical challenge. The same applies to me. Crafts are a constant learning process – that’s what I find so fascinating about it.” Their professional click prompted them to apply for the Crafts Council Netherlands’ incentive program and to further explore that learning process in the context of basketry.

Crafts are a constant learning process – that’s what I find so fascinating about it.

Although crafts can also be taught by means of text and pictures, according to David and Hofman the most important part of the process happens in handwork, where a constant conversation between body and material takes place. This is precisely why, they argue, the transmission of crafts is so important: it is a way of learning that does not rely on spoken or written language, but on seeing and feeling. 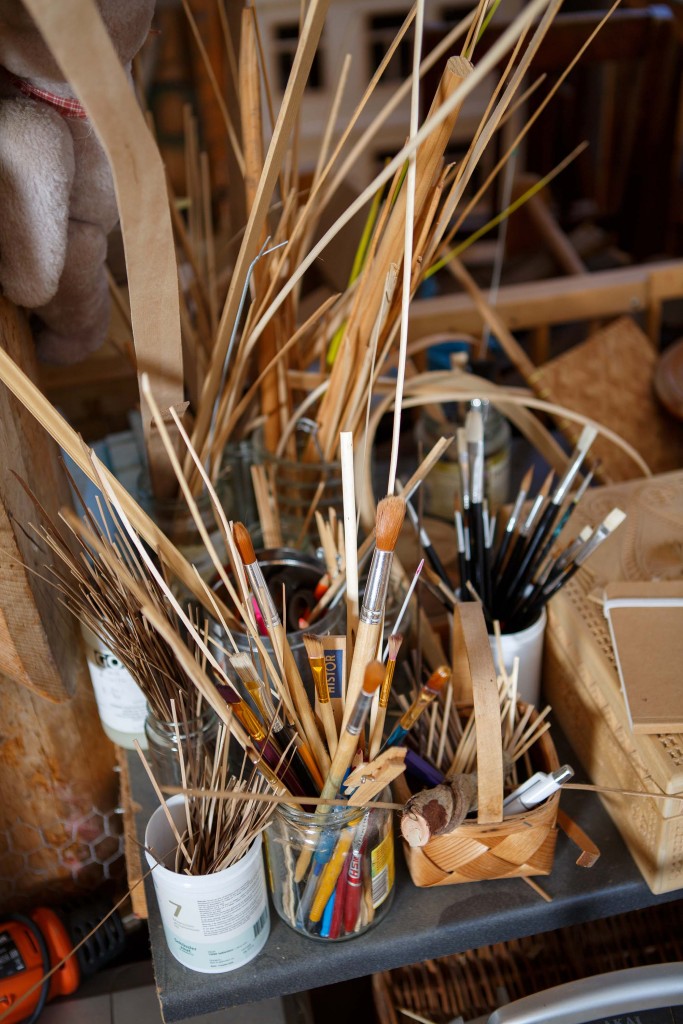 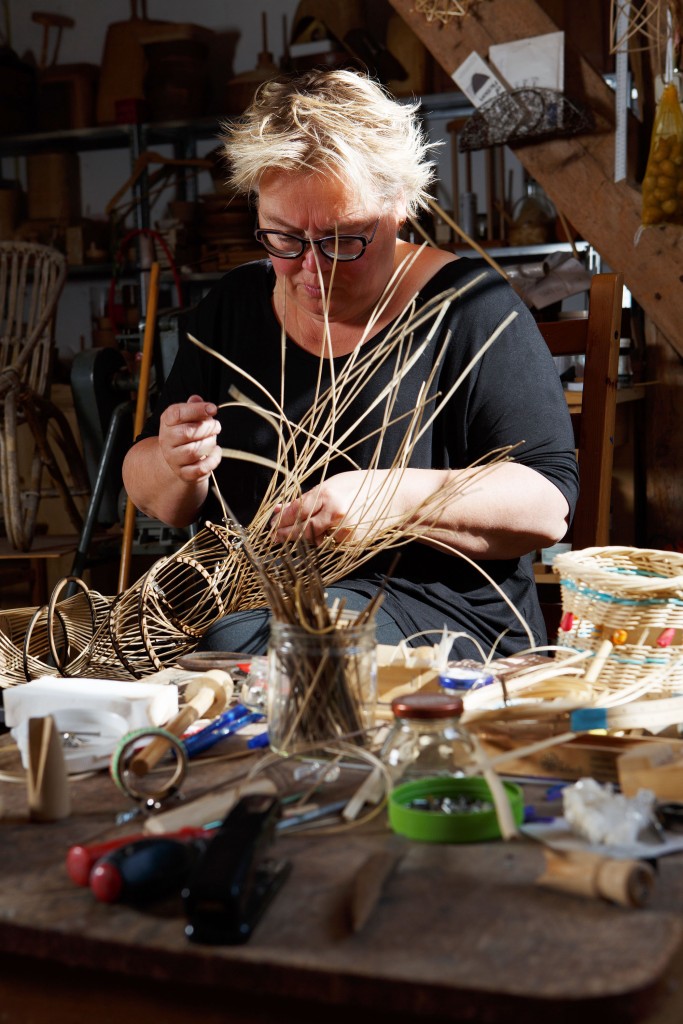 However, at a time when written and spoken language predominate, learning a physical craft can feel like a particular challenge. Moreover, the basis of basket weaving, making a round base, is technically challenging; learning the making process can feel like a barrier for new makers. The base of the basket simultaneously dictates the shape of the final product. The number of fibers used and the direction in which they are woven determine the follow-up. That limits the possibilities and the creative freedom of its maker, says Hofman.

The rings allow us to let go of the fixed base of basket weaving.

Hofman and David decided to replace the base with newly designed tools: wooden rings with holes in them, generated by David in Grasshopper design software and executed by a computer-controlled milling machine. Individual strands of material are attached to the rings, and woven from there. Another ring is then attached at the end. In this manner, structures can be built. David: “The rings allow us to let go of the fixed base of basket weaving, so makers can react more spontaneously to the shapes and the ways that fibers are organised.” 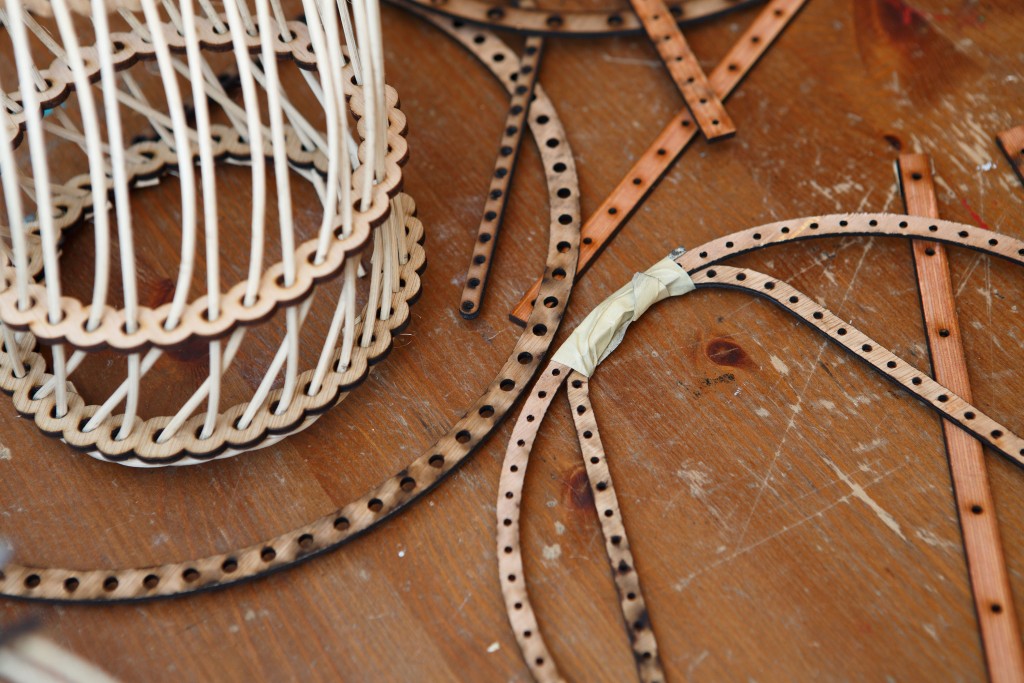 To produce the rings, David developed a so-called script, a formula with various parameters, such as the diameter of the ring or the number of holes. David sent the finished rings to Hofman, who then got to work with them. The models continued to evolve based on feedback from David and Hofman, as well as from the weaving material. That is centercane, a type of rattan that is light, strong and pliable. Each strand, however, has its own tension and breaking points, and the material cannot be forced into any kind of shape. Together, Hofman and David made a number of test models with varying rings and different ways of weaving, braiding and twisting, showing the potential of the process. 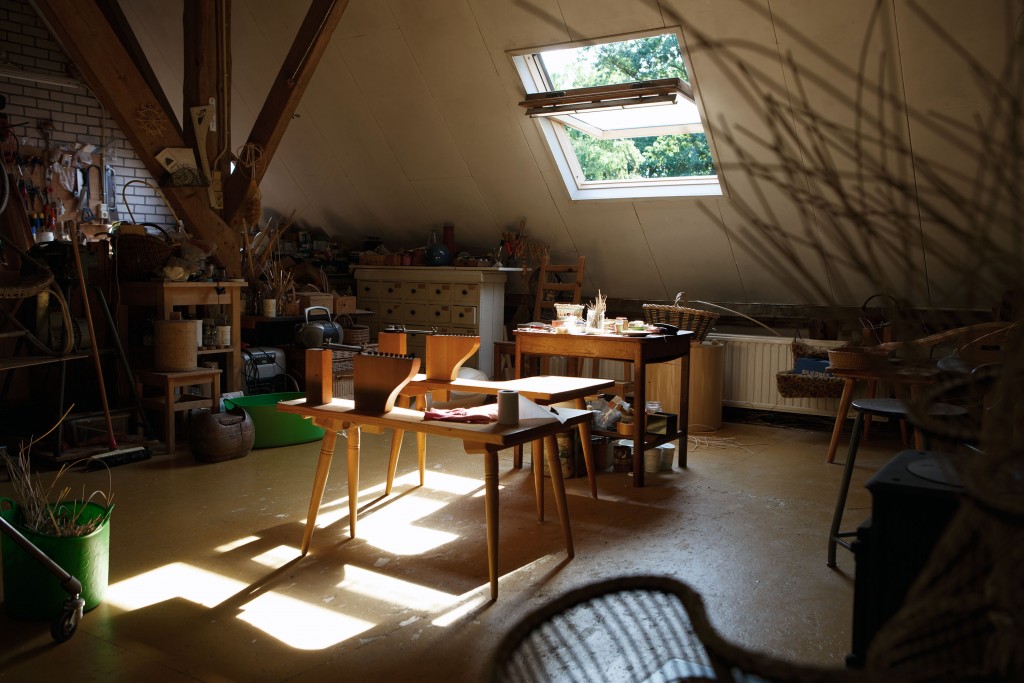 The rings also allow less experienced makers to experiment with the technique and develop their own formal language. Instead of first setting up a complex base that defines the shape of the end result, they can choose the number and rhythm of the holes in the rings and get straight to weaving, bending or twisting. This makes the technique more accessible to a new generation of makers, and also makes it more fun: the starting point of the process is no longer a technical puzzle, but a creative exploration and exciting dialogue with the rattan.

It is almost impossible to predict exactly what the centercane will do. As a human, or as a computer. 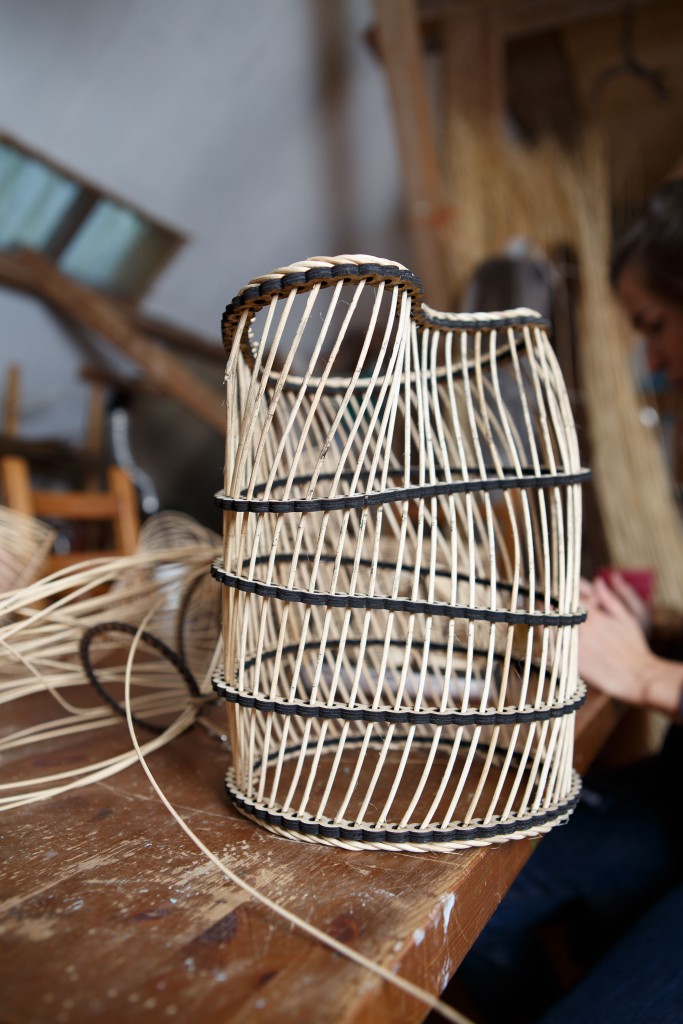 The rings also invite experienced basket weavers to enter into a more open relFationship with the material. Hofman: “Traditionally basket weaving revolves around three main factors: the purpose, the material and the technique. By letting go of the purpose of weaving as well as a set technique, there is much more room to let the material speak for itself.” Understanding the material, then, becomes ever more important. David: “It is almost impossible to predict exactly what the centercane will do. As a human, or as a computer.” Hofman: I don’t think we’ll ever quite manage to. We might get closer, but ultimately the material will continue to dictate the result.”

This method may also spawn a new form language in basket weaving. By deciding on the number of fibres and their rhythm while abandoning the idea of a specific function, structures can emerge that are, for example, more transparent, larger in scale, and generally more autonomous. David: “In craft, there is the idea that an object without a direct function has less value. But I’m not so sure about that. There is so much to learn from these objects and from the research that went into them, the hybrid process.” For example, they can serve as a source of inspiration for other disciplines, such as architecture or furniture design.

On the technical side, Hofman and David hope to extend the script in the future, based on hand-on experiments, to more accurately predict the behaviour of woven structures. That will save time currently dedicated to the making of physical models, and will leave more room for creative play and the creation of larger and more complex structures.