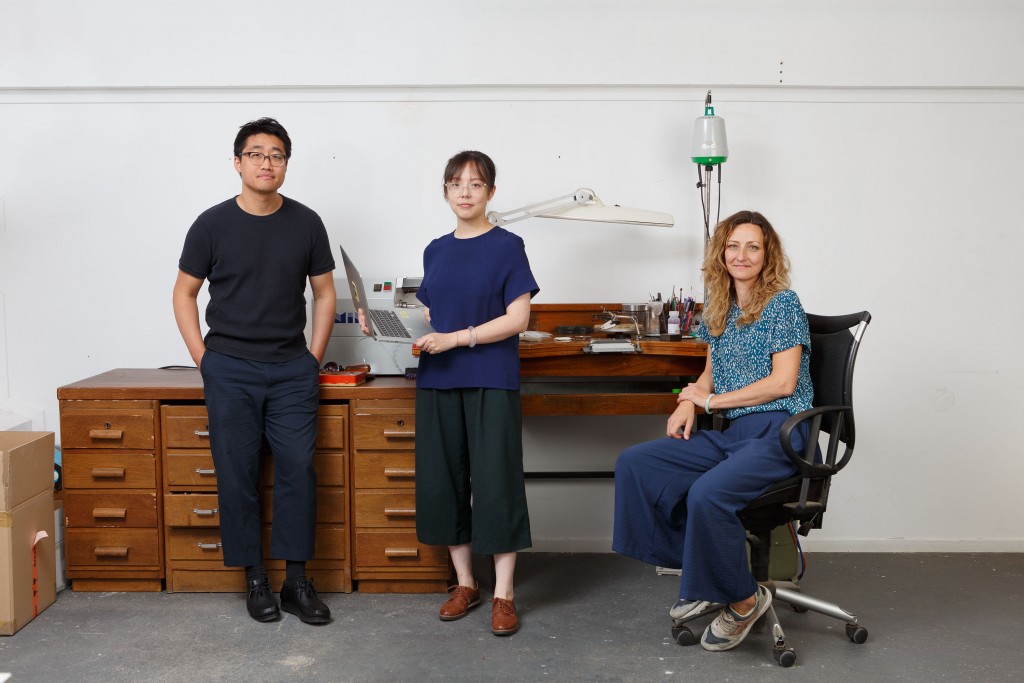 Filigree is one of the oldest and most intensive techniques in goldsmithing. It is a metal decoration technique that involves twisting and flattening metal into fine wires that can be used to decorate surfaces or create delicate, lace-like structures. In the past, filigree embellished Etruscan brooches, Chinese imperial crowns and Zeeland buttons, among others – it is a technique that spans centuries as well as continents. Today, however, the craft is in danger of disappearing: in recent decades, the time-consuming and costly technique has lost traction, while filigree makers are already few and far between.

How can the technique be both preserved and renewed, so that it may return into the limelight? That is a question which goldsmith Eva van Kempen, one of the few filigree makers in the Netherlands, had been asking herself for a long time when she met industrial designers Mingshuo Zhang and Yona Huang last year. Zhang and Huang work together as a duo under the umbrella of Ming Design Studio. It turned out they were asking themselves the same question, but from a different perspective.

Together, they experimented with the development of a new tool that simplifies the making of a filigree pattern. With the tool, the makers aim to make the technique more attractive and accessible to other goldsmiths and designers, while preserving the craft’s meditative qualities.

In the Netherlands, the filigree technique was historically used to make regional jewellery such as Zeeland buttons.

In the Netherlands, the filigree technique was historically used to make regional jewellery such as Zeeland buttons, distinctive, finely decorated metal studs that were used as clothing buttons as well as worn on pins and brooches. However, the corresponding regional dress has been out of vogue for decades. With the waning of regional costumes, the demand for filigree has also declined, and with it the knowledge of its making process. Older makers quit and the younger generation rarely takes over. For new makers, barriers are high. Filigree is a very labour-intensive specialisation that can only be performed by an advanced and skilled goldsmith. Moreover, the current hourly rate of makers is many times higher nowadays than it used to be. As a consequence, the work has become ever more costly. 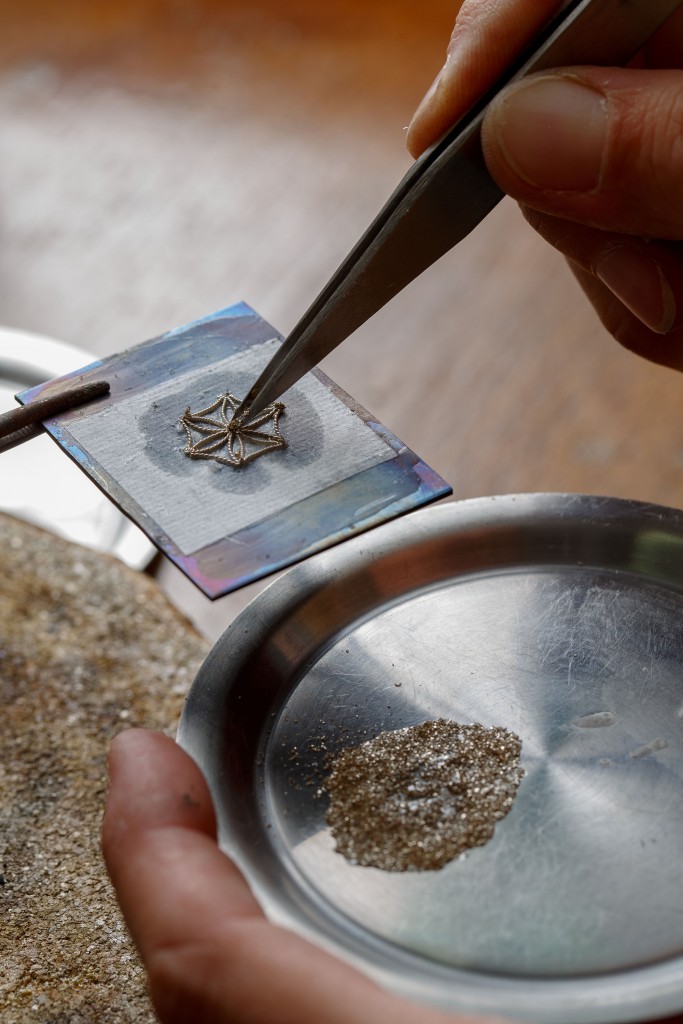 Van Kempen, who was trained as a goldsmith at the Schoonhoven Vocational School (Vakschool Schoonhoven), nevertheless got attracted to filigree in the late zeroes. She particularly liked the complexity and technical challenge, as well as the repetitive, attentive work. “It’s almost a form of meditation for me,” she says. She took a filigree course in 2010 and further immersed herself in the technique as a jewelry designer and maker. Parallel to her growing knowledge and experience, she was confronted with the realisation that in the Netherlands, the craft is waning.

This is not the case everywhere in the world. During the master’s program ‘Challenging Jewellery’ at the Sandberg Institute, Van Kempen researched the history of filigree and compared its development to that in China, a country that has an even longer and far richer filigree tradition than the Netherlands. Here, active policies are in place to preserve the craft and encourage its practice. Examples are the launch of considerable filigree commissions and innovation projects. Recently a number of historical filigree objects appeared in a popular costume series. In addition, filigree was declared intangible cultural heritage in China by 2008. It does not have the same status in the Netherlands.

Through an international innovation program around Chinese inlay filigree in Shantou, South China, Van Kempen met designers Zhang and Huang. Both grew up in China and studied at the Design Academy in Eindhoven. They previously worked for larger companies such as Philips, but today they mainly design under the banner of Ming Design Studio, which is known for projects that merge values of craftsmanship with their experience in digital design technology and the world of mass production. One example is the Bold Stool, a modern-looking stool finished with artisanal Chinese lacquerwork. 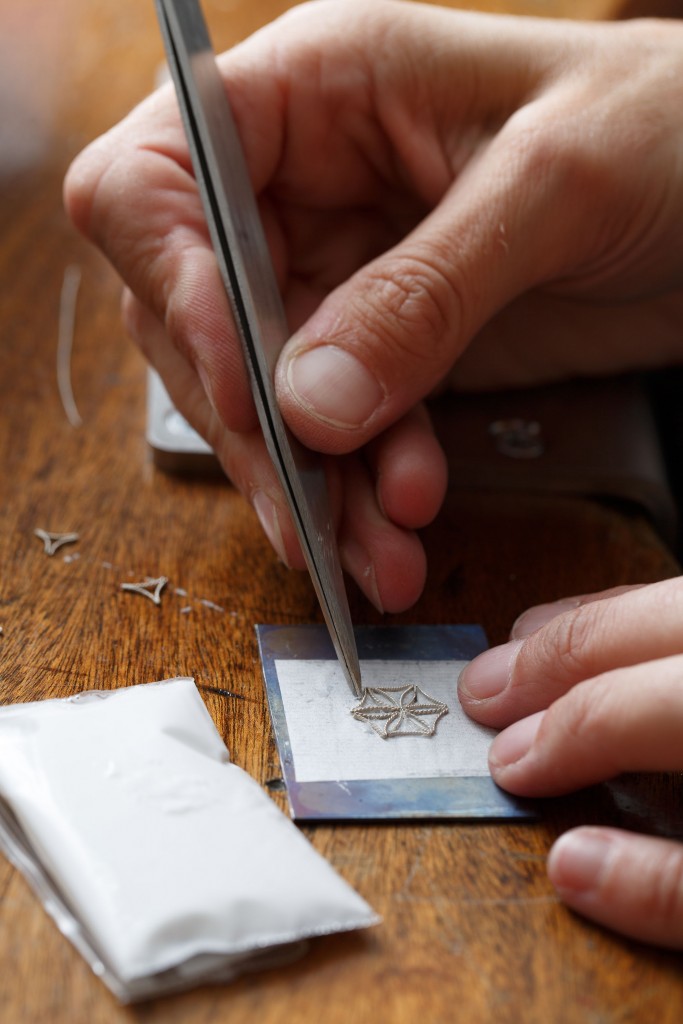 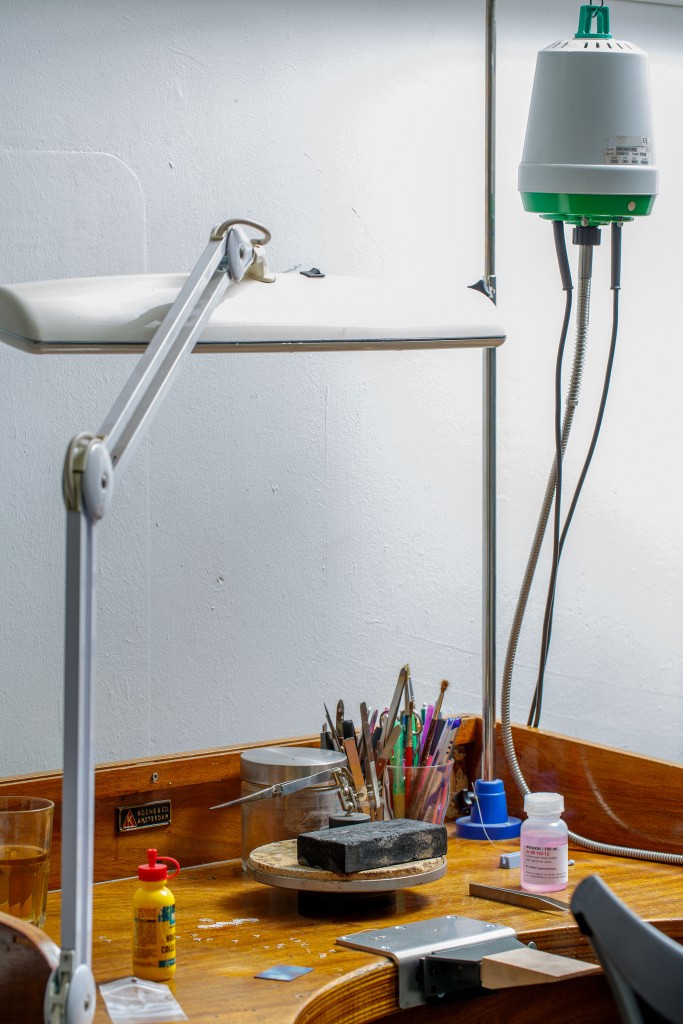 With Van Kempen, Huang and Zhang shared the mission to innovate filigree in order to bring it to the attention of a wider audience. Together, they signed up for the incentive programme of the Crafts Council Netherlands, aiming to make the filigree process more accessible through a combination of digital and artisanal techniques. That implied finding a way to produce filigree patterns more quickly, more easily and with cheaper materials in order to pave the way for new applications, for example in contemporary design.

In the Netherlands, filigree has quite an old-fashioned image, it always looks very delicate, with swirls and flowers. I wanted to get away from that.

In addition, there was a second challenge: innovating filigree’s design language. “In the Netherlands, filigree has quite an old-fashioned image,” ponders Van Kempen. “It always looks very delicate, with swirls and flowers. I wanted to get away from that. That could make the technique more attractive not only to its makers, but also to the wearers of today.” The same counted for Zhang and Huang. Huang: “In China, people still work with ancient motifs. We wanted to discover what other forms filigree could take.” 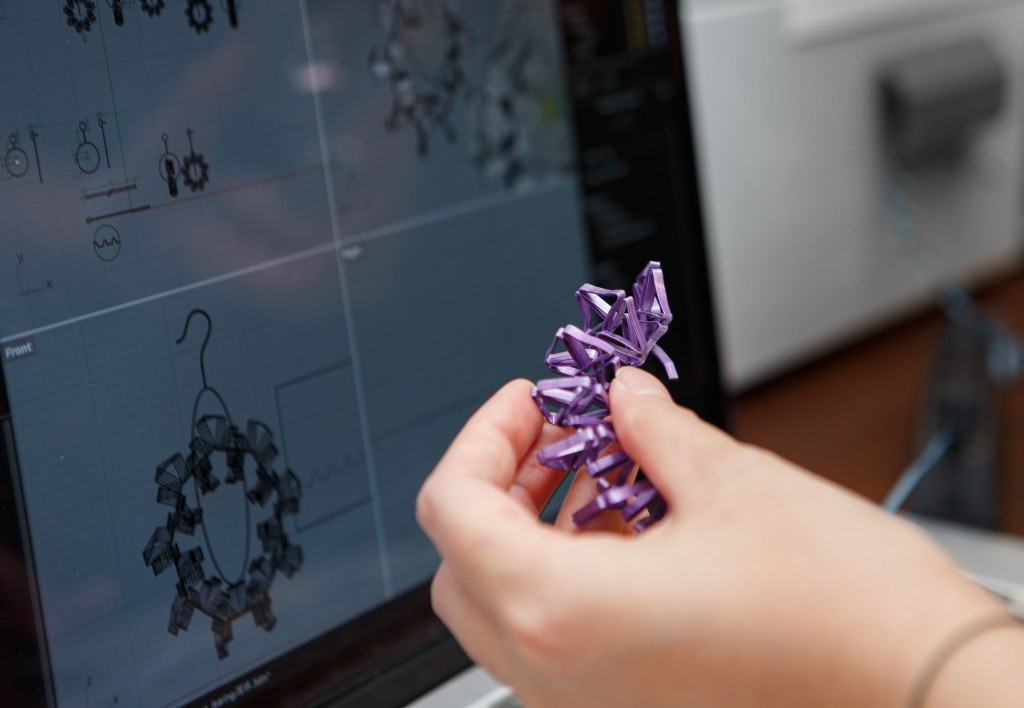 The three decided to design a tool that could pre-bend a rolled metal wire into a filigree pattern. This specific pattern, which is normally formed from six separate, equal parts, could then be made from a single wire. The tool was digitally designed by Huang and Zhang, who dissected the existing filigree pattern and reinterpreted it.

During the experimental design process, several generations of the tool were 3D-designed and printed by Zhang and Huang in consultation with Van Kempen, who also physically tested the models. These tests provided important feedback for the digital design process. Repeatedly, the tool proved unable to bend the metal because it got stuck in the tool. Whenever that happened, the tool was adjusted digitally and printed and tested again. 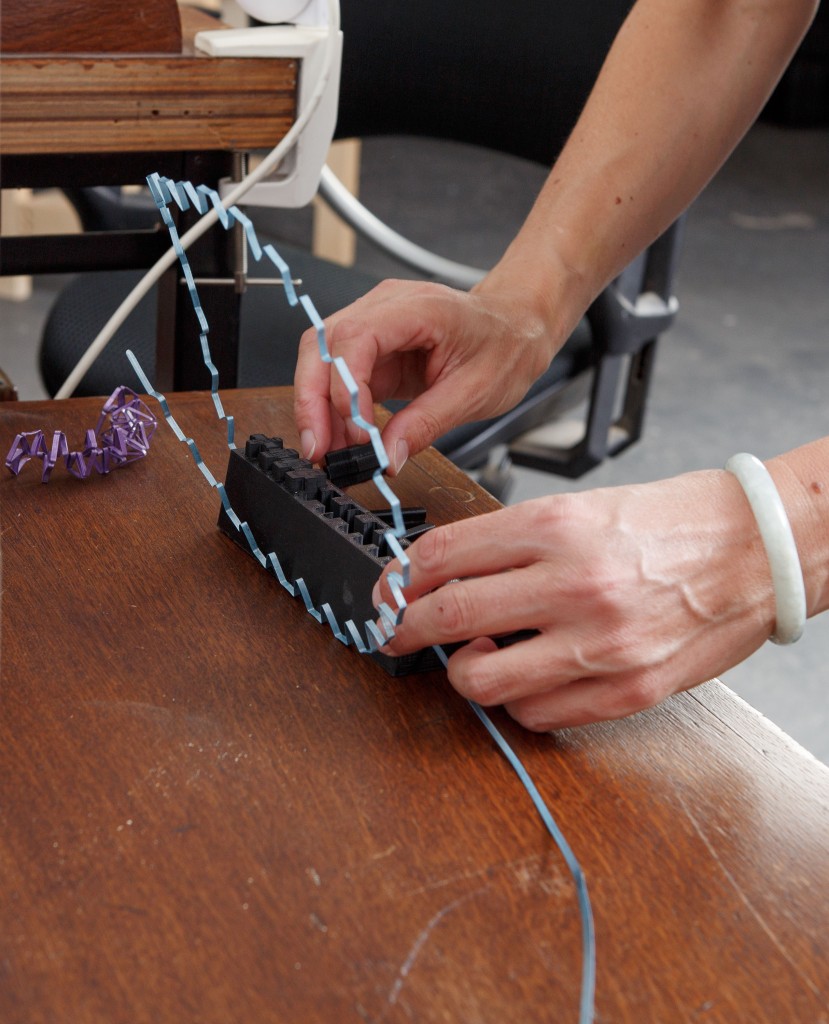 The current version of the tool works like a press: a flat-rolled metal wire is placed in the tool. Twelve individual inserts are pushed into it by hand, creating the basis for a filigree pattern. The pre-bent wire can then easily be shaped into the pattern by hand and tweezers. The result can be used decoratively in a variety of ways or manipulated further.

The tool can be used with precious metals as well as less precious materials such as aluminium. This allows makers to experiment with it more freely and to work on a larger scale, opening doors for applications in the design field. “It is through upscaling it that the beauty of filigree structures really becomes visible,” says Huang. The magnified, flat filigree patterns have abstract forms, not entirely organic nor geometric. They add a hybrid, contemporary design language to the existing traditional vocabulary.

Pre-bending the filigree pattern still involves a lot of handwork. Zhang: “We deliberately chose to develop a tool that does not replace the meditative handwork, but mainly removes the barriers to work with the technique.” In this way, the makers hope to contribute to keeping filigree craft alive for future generations, and to put new makers on the trail of the original filigree technique. Van Kempen: “It is so special to be part of a long and rich making history. It offers a connection to the past, the present and the future at the same time.”

We deliberately chose to develop a tool that does not replace the meditative handwork, but mainly removes the barriers to work with the technique.

Beyond this project, Van Kempen is committed to the revaluation of filigree technique in other ways. She is currently lobbying for the craft to be declared intangible heritage in the Netherlands. In addition, she is the founder of The Filigree Embassy, a recently launched online open-source platform for knowledge sharing about filigree to which makers, designers, wearers and connoisseurs can contribute now and in the future.