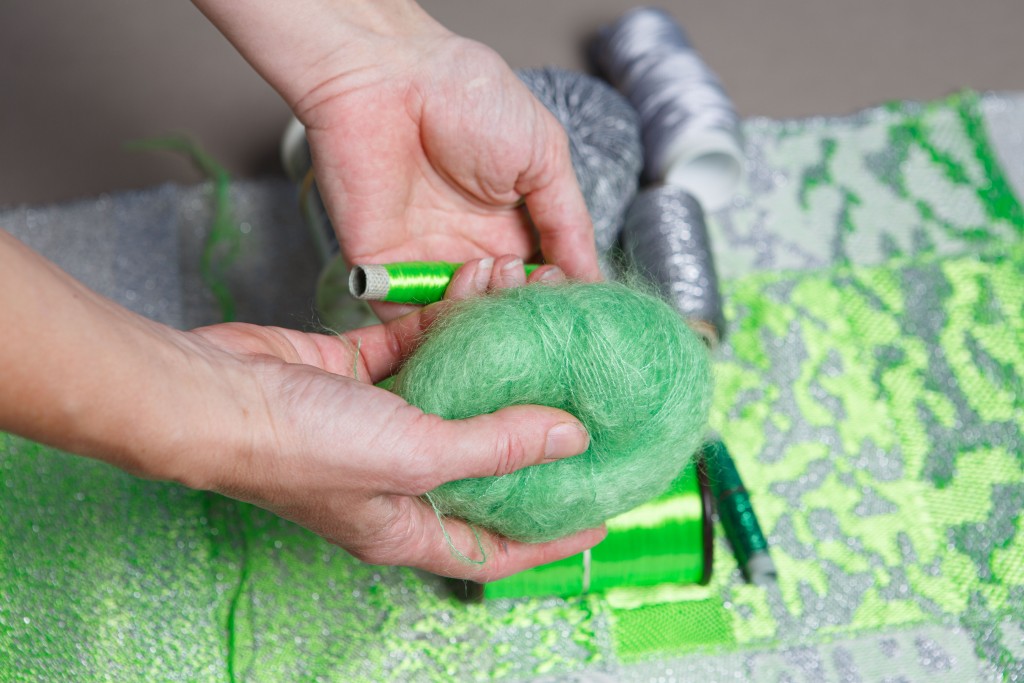 Over the last few years, computer technology has come to play a key role in the textile and fashion industry. Digital design software has largely replaced the designer’s pencil and paper, virtual 3D renderings of garments have taken the place of cloth samples. Until recently, the end product was always a physical garment or fabric, but that too is beginning to change. Over the past two years, catalysed by the pandemic, a growing number of fashion companies has started developing digital fashion items: clothes, accessories, or even fully dressed avatars with their own body shapes, skins and hairstyles. These can be sold online to be used in the metaverse, in games or on social media.

What could that mean for the physical crafts of textile and clothing design and production? Could the digital and the physical feed into each other, and if so, how? It is a pertinent question for design developer Flavia Bon and textile designer Anita Michaluszko, two virtual design enthusiasts who were both educated in physical crafts: Bon was schooled as a tailor and subsequently as a fashion designer, Michaluszko studied textile and fashion design as well as fine arts. They applied to the Crafts Council Netherlands incentive programme to explore what would happen if digital and physical fashion and textile design would collide. Rather than products, they developed new workflows in which the physical and the digital continuously challenge each other. 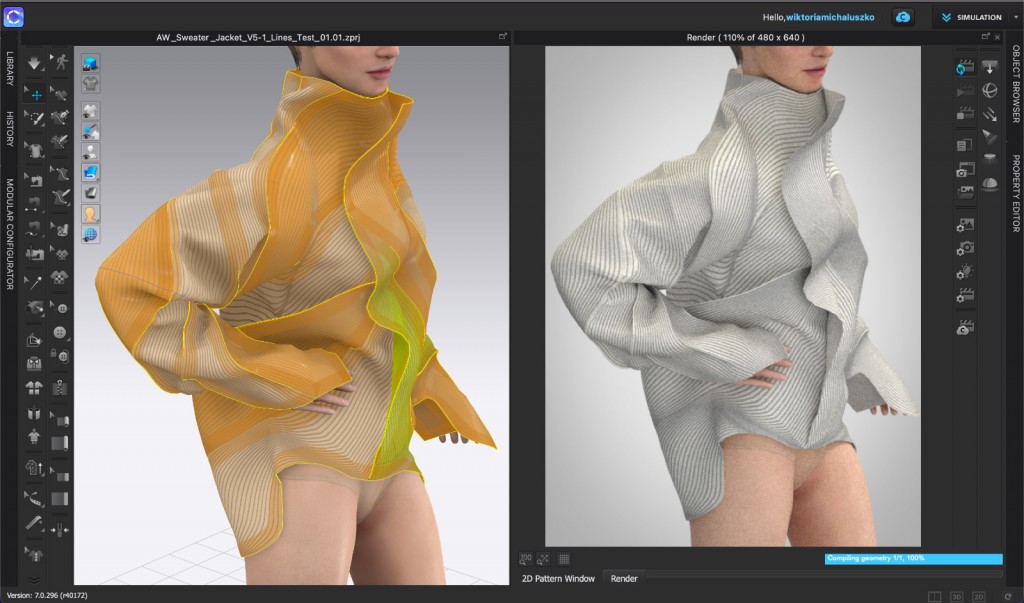 Already during their studies, Michaluszko and Bon had something in common: a fascination for machines and computer software, and a knack for manipulating these for the sake of creative experiments. Michaluszko and Bon studied textiles and fashion around the time when computers and computer-controlled technology, such as laser cutters, were relatively new to the design school classrooms. These machines mesmerised both Michaluszko and Bon: to them, they were not just tools, but means to explore different processes and experiment with functions. Bon remembers ‘playing around with lots of machines’, she says. She still does now.

These tools help me experiment.

“These tools help me experiment. If a laser cutter is made to do things a certain way, I like to use it in a different way, and see what comes out.” It’s similar to Michaluszko. “There are different reasons to learn using a new tool: one is to get the task done. I do it to add a challenge and to make a task more interesting.”

A few years ago, both Bon and Michaluszko turned to digital fashion. Michaluszko was primarily interested in digital aesthetics and wanted to see what could be achieved by using digital tools. It was the same for Bon, though she had other reasons as well. “I was questioning my profession,” she says. “As a design developer, you see the backside of the clothing production process: the working conditions, the material waste. I became an extreme minimalist myself in terms of fashion. I thought: we have to go digital now.” 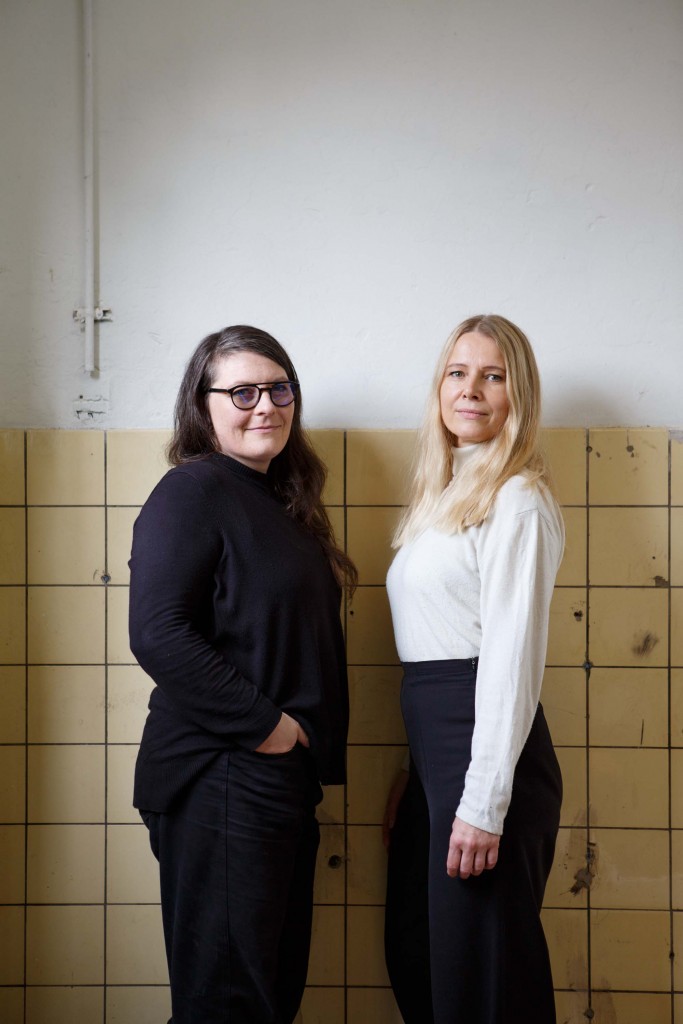 Bon and Michaluszko studied at the same university for some time, but only met years after their respective graduations. They connected on Instagram, bonding over their mutual interest in the possibilities of virtual fashion. During a summer course in virtual fashion at the Amsterdam Fashion Institute (AMFI), they found out that they were perfect opponents as well as collaborators. “We have a similar background but we approach it in different ways,” Bon says. While Bon is focused on digital, Michaluszko keeps returning to the physical practice of weaving and the tactility of fabrics. “Flavia will probably go to the metaverse on a rocket, I’d rather be the light tower on the ground,” Michaluszko says. “I’m so fond of the physical technique of weaving, and I don’t think it is being explored enough in the industry, or in virtual fashion, for that matter. We are so used to industrial products, which all look very similar. The craft of hand weaving can show us what else could be done with textiles and what that could look like.”

Last year, Bon and Michaluszko applied for the incentive programme together. Bon: “The project was about combining digital and physical crafts. I saw a lot of opportunities: not just for combining tools and merging digital with physical, but also for driving the crafts sector forward. When you are in this field, the big question is always: how will our craft, our history, our heritage survive? We always look back. But that was never the motivation for me. For me it was always about the future: what else can we do, what comes next for us?” 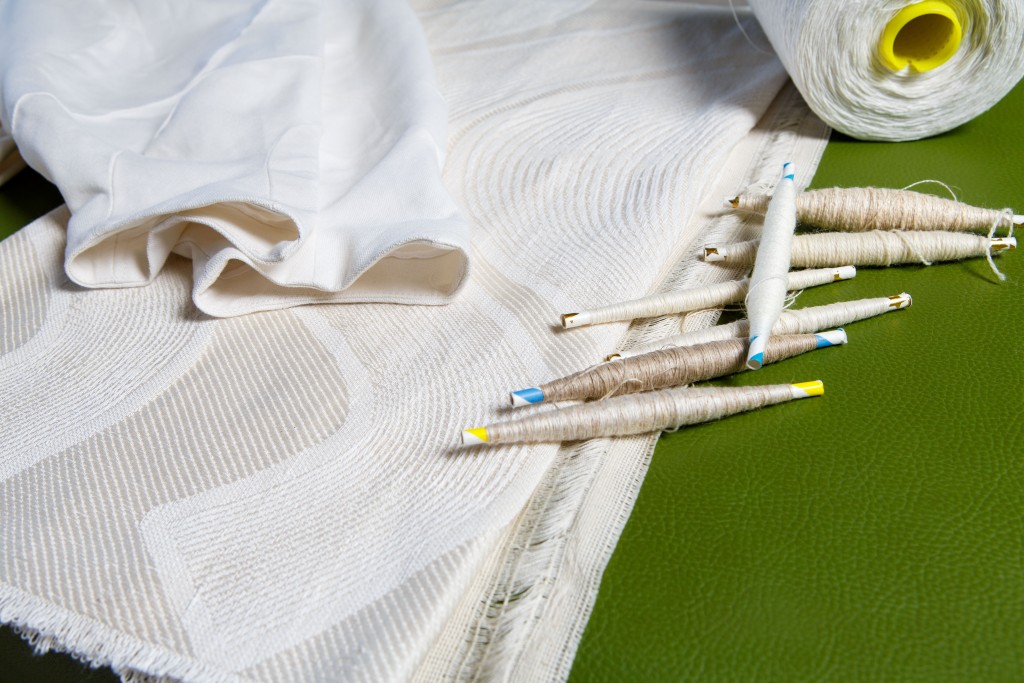 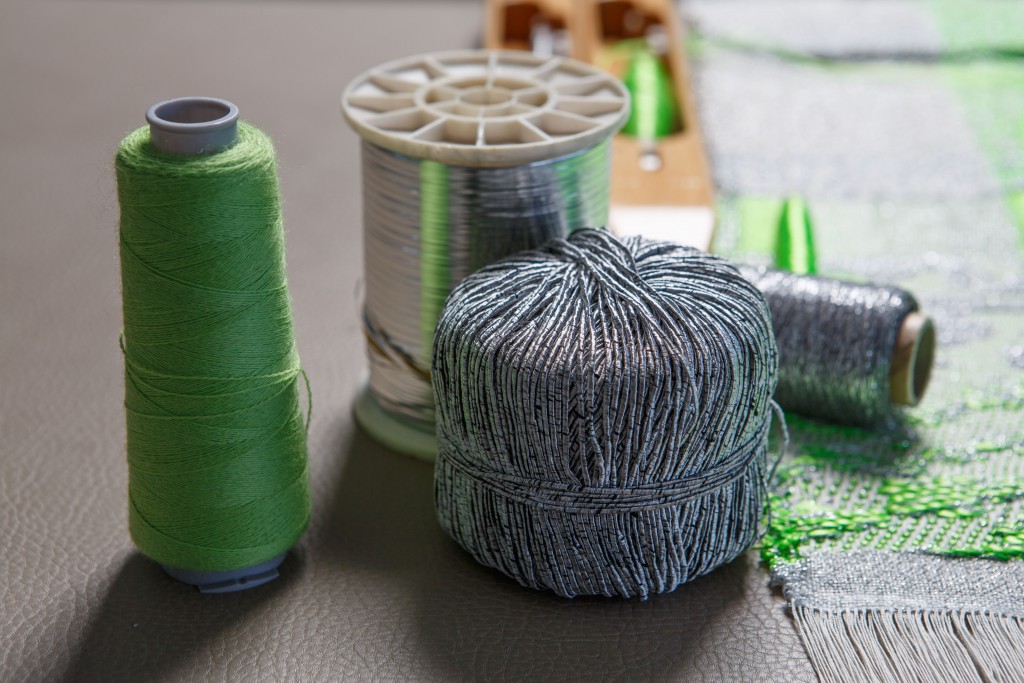 We wanted to see what would happen if we would mix it all in: existing tools, new tools, our knowledge.

For their project, titled ‘Augmented Weaving’, Bon and Michaluszko combined their expertises in order to develop new working processes that coupled the digital to the physical. Bon: “We wanted to see what would happen if we would mix it all in: existing tools, new tools, our knowledge.” They started off intuitively. “I designed garments in virtual reality, then used Clo3D software to lay them out in digital patterns. Anita used these patterns to weave textiles on a jacquard loom. The woven textiles came back to me and I stitched them together into a three-dimensional garment. Anita, meanwhile, would digitalise the textiles and apply them to the digital garment.” The process, Bon and Michaluszko underline, does not have a fixed point of departure. Michaluszko: “You could start wherever: with a weaving pattern or a 3D object. From there, you could go left or right, digital or physical. It is nice to let yourself be guided by the process.” 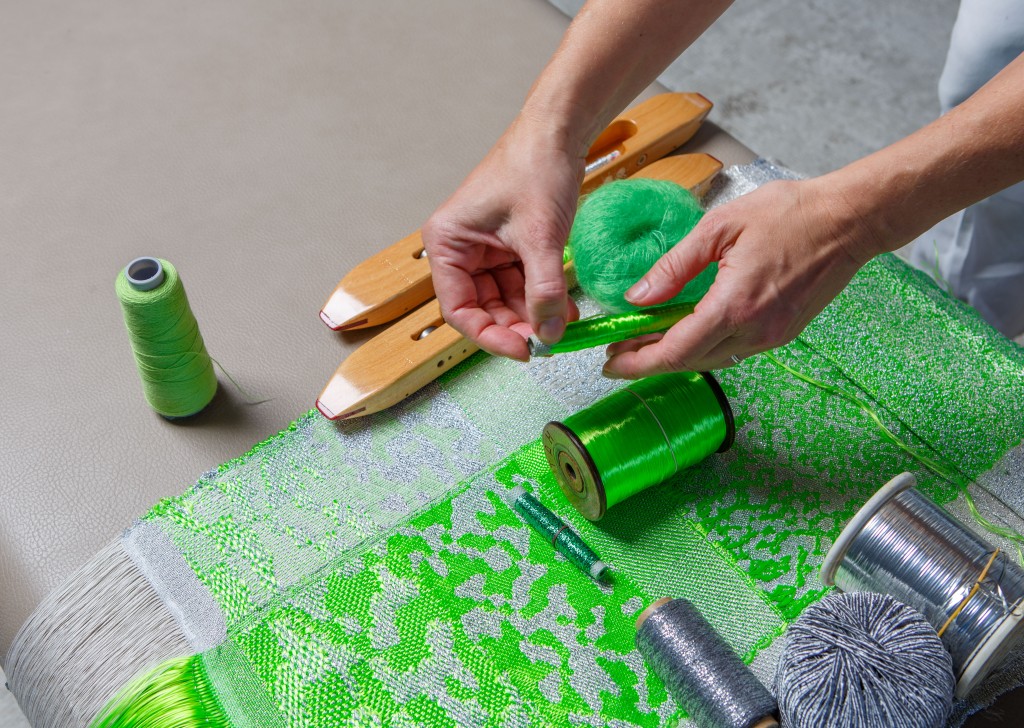 In their collaboration, Bon and Michaluszko work like a ‘two-woman band’, says Michaluszko. ‘We are two people, but we both play different instruments, so what we create is something bigger than the sum of two parts.” In fact, the band consists of even more than two players, Michaluszko continues. “The machines are players as well. A computer, for example, is not just an instrument – it will not always do what you tell it to do. It can come up with things that surprise you. In that sense it’s not just Flavia and me: it’s Flavia, me and the machines.” 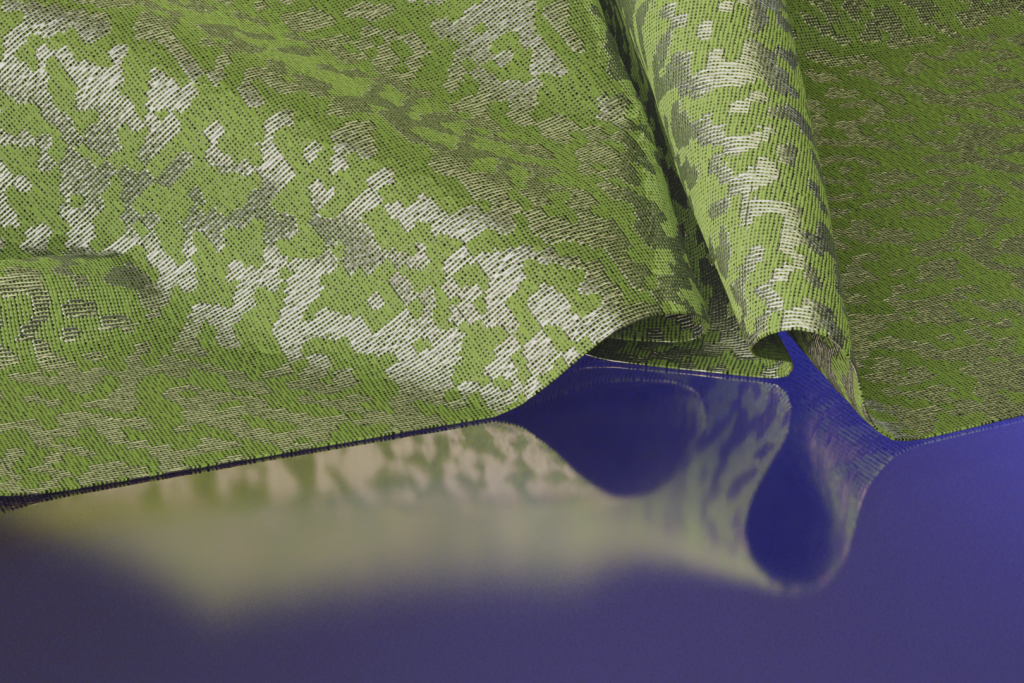 Designing for the virtual world comes with many benefits. For instance, it offers considerable artistic freedom to makers, who are able to evade the limits and consequences of material production. While the results are not tactile, they do appeal to other senses, like the imagination, says Michaluszko. Virtual design does not only expand, but also challenge physical craft processes by asking the question of how to translate virtual designs to the physical world. How to achieve a similar effect within the boundaries of available materials or sustainability considerations? Should the digital and physical object even look similar, or is the aim to connect the two without creating exact copies? If so, what does that require?

At the same time, physical crafts are crucial to the existence of virtual design. “They are the basics,” says Bon. I would not be here if I had not learned how to stitch two pieces of textile together.” Michaluszko: “A lot of our understanding of how things work in the digital world comes from the physical world. How things are shaped, how they hang, how they move. In order to grasp that, one has to spend a lot of time studying the physical world.” Bon: “Last year during the course at AMFI there was one day dedicated to textures. At the end of the day I was exhausted: I never realised how deep you have to think about the properties of materials in order to get them right digitally. It was a nice discovery for us as crafters: the digital space can also offer a new perspective on existing tools, skills and materials.”

The digital things, they do have emotion for me. I feel connected to them. 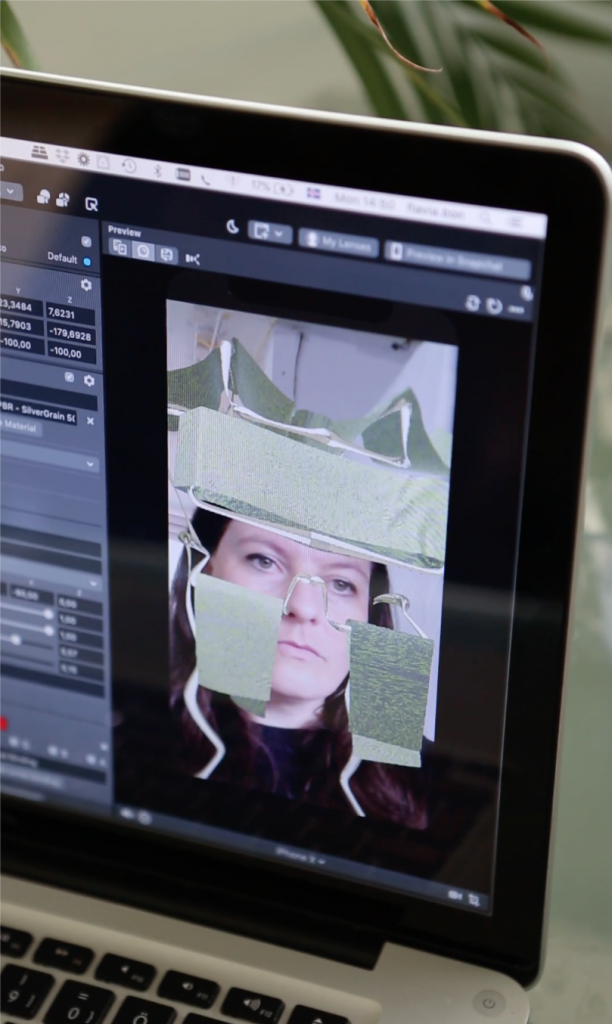 The workflows also resulted in products, such as fabrics, a wearable object and a pair of augmented reality earrings based on the textiles they developed. These were never their main goal, Michaluszko and Bon underline, but they are nevertheless important. Apart from being valuable visualisations and test cases of their thought process, they offer an economic perspective: the earrings, for example, could be sold online as digital assets and could provide their makers with an income. And even if they can only be worn on a screen, they do affect the wearer outside the screen as well, Bon says. “The digital things, they do have emotion for me. I feel connected to them. They evoke conversations, they inspire. The industry made me a minimalist, but I’ve kind of found my inner fashionista again.”