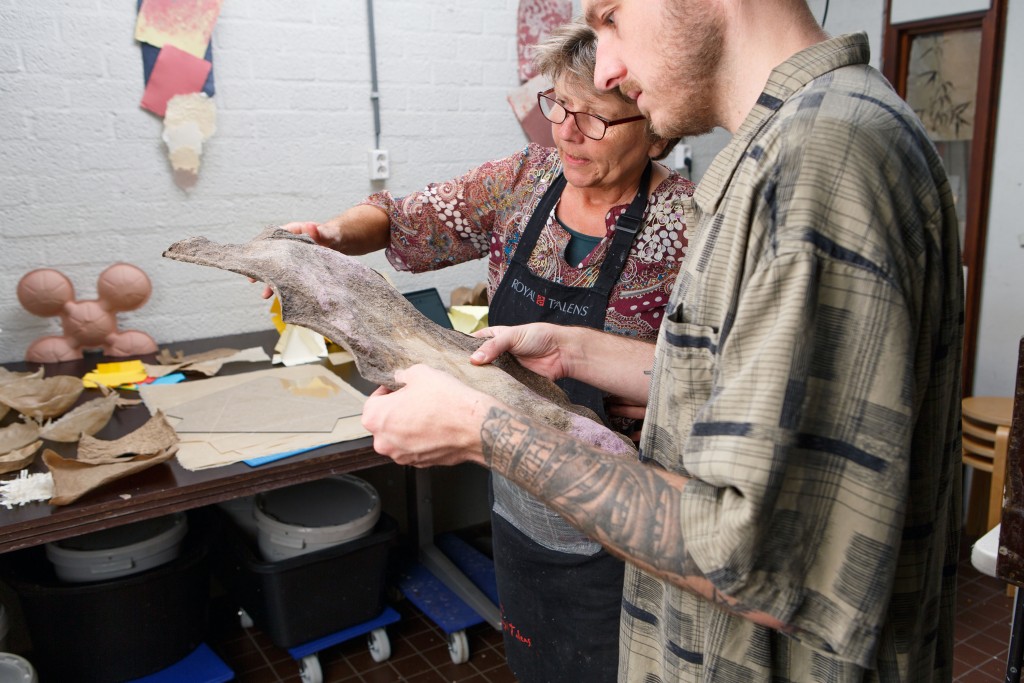 Paper is an ancient material that today offers numerous opportunities in the context of the circular economy. It can be made from all kinds of residual materials, from old textiles to weeds and organic waste, and overall is easily biodegradable. Paper is known to us in the form of flat sheets, which can be folded, cut and glued into three-dimensional shapes. If paper could also be seamlessly moulded into 3D, that would open many doors for the use of paper in functional and autonomous objects which could be produced by hand – or by machine. 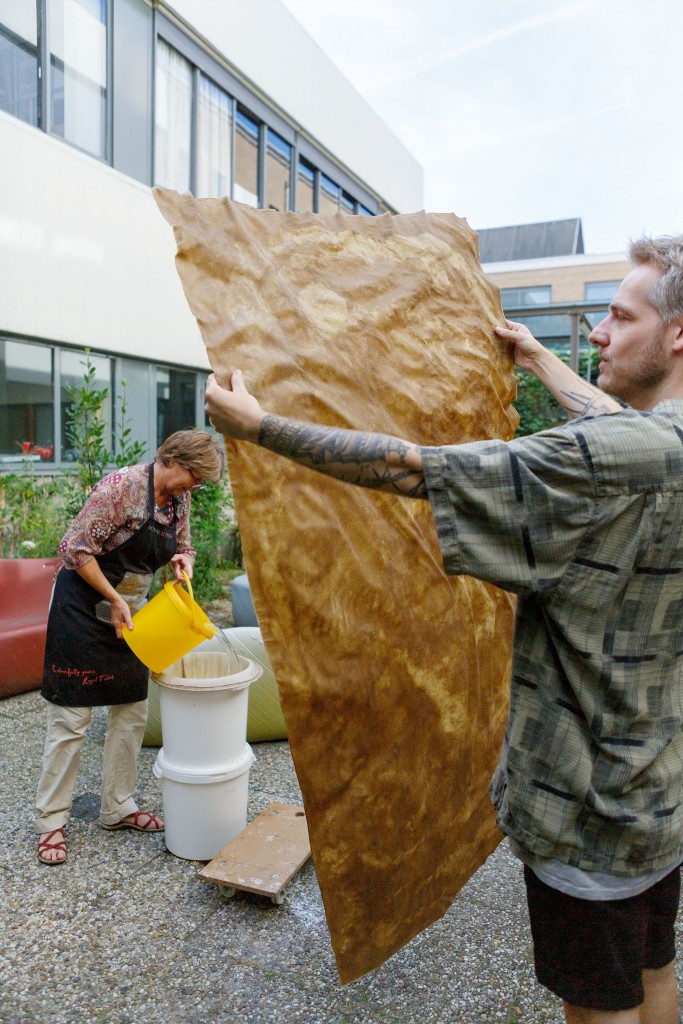 De Hoop and Van Veen both enjoy working with residual materials. Van Veen graduated from the Willem de Kooning Academy in Rotterdam in 2014. He mainly makes design objects from found plastic elements, sourced at construction sites, for example, which he transforms into furniture or light objects. The philosophy of reuse underpins his working method. Van Veen: “I don’t want to burden the planet with my urge to make things.”

I don’t want to burden the planet with my urge to make things.

In doing so, Van Veen also imposes a limit on himself: he can never produce his own material in a chosen size, colour or quality, he always has to look for it. This makes his working process dependent on lucky finds or the generosity of his contacts in the construction industry. For this reason, Van Veen was keen to experiment with making his own materials, specifically paper. “The freedom you have with paper seemed nice to me,” he explains. “You can make paper from any plant fibre in nature, I like that. I love the idea that it’s possible to use leaves from trees or weeds, plants that nobody else has use for.”

Van Veen delved into the papermaking process together with De Hoop. She has her own papermaking plant in Rotterdam, called the PapierLab (in English: the PaperLab), where, among other things, she experiments with processing fibre-rich waste streams into paper and paper products. In doing so, De Hoop is constantly looking to future-proof the technology, she says. For de Hoop, that means not only passing on the craft, but also looking for new residual materials to work with and applications that add significant value to those materials. “The making of craft paper is very labour intensive, the process is too expensive for the product to be used as mere stationery,” she says. If the final product generates more income, the craft can continue to exist.

In addition, De Hoop sees the potential of paper for the circular economy, as a way to process residual materials into a product that is then also biodegradable. “Especially in a port city like Rotterdam, new materials keep coming to the surface. I always want to know what can be done with those.” So when Van Veen asked her to sign up together for the incentive programme of Crafts Council Nederland to further experiment with the possibilities of paper, she immediately said yes.

Apart from being a designer, Van Veen works as a maker of moulds for the synthetics industry. He designs those moulds in computer software and converts them into programming for the milling machine. De Hoop and Van Veen came to the conclusion that together they would develop a 3D object made of paper using those moulds. Van Veen really wanted to make a lamp. “A lamp is a magical thing for a designer,” he says, smiling. “It’s a commercial product. And considering the fragility of paper, a lamp would be suitable, because it’s a product you don’t have to touch every day.”

De Hoop showed Van Veen a number of recent paper samples made from different residual materials. The asparagus paper sample immediately caught Van Veen’s eye, he says. De Hoop had made the sample from a small amount of asparagus peels, which had been fermenting in sealed buckets at the PapierLab for four years. The buckets stank terribly when she opened them some time back, de Hoop recalls, so much so that neighbours complained about it. Van Veen, above all, saw a beautiful design material. “It’s nicely translucent, and the little fibres give it a special texture. Perfect for a lamp.” 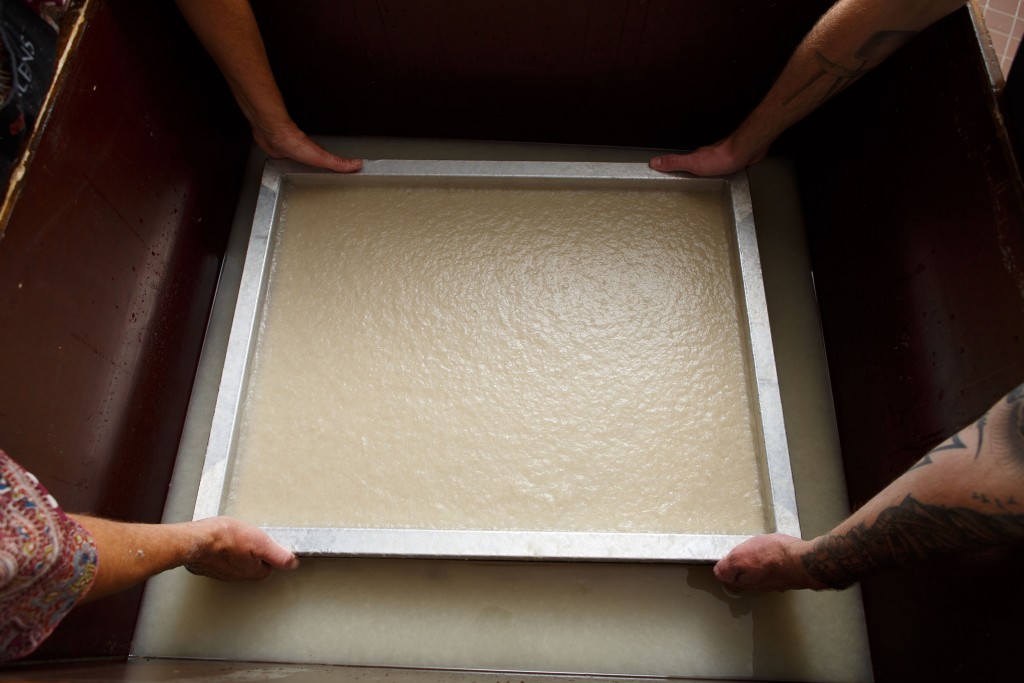 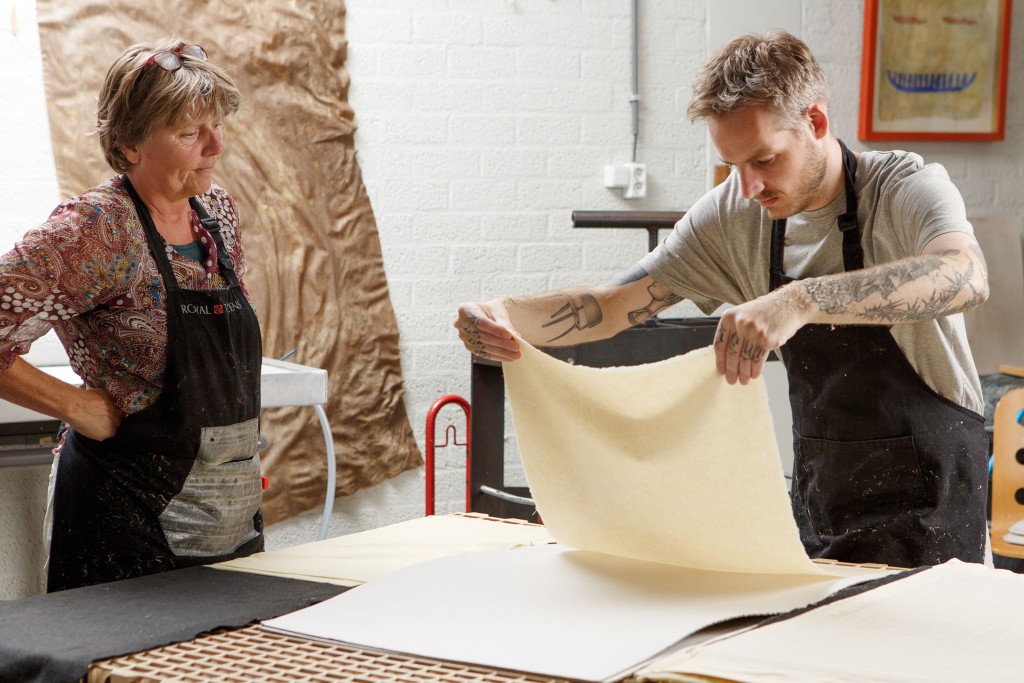 Together with De Hoop, Van Veen immersed himself in the whole process of papermaking at the PapierLab in Rotterdam to find out at which step of the making process the switch to 3D could best be made without losing the unique qualities of the material, such as its translucency and fibrous texture. The first option was at the screen stage. In that phase, the still-wet fibres are placed on a screen-like sieve, so water can leak out. This sieve usually has the shape of a flat rectangle, but could also be shaped like a funnel or sphere, Van Veen and De Hoop thought. Van Veen would be able to 3D-print those. To try, they experimented with spraying, pouring and smearing the fibres over three-dimensional sieves, but the asparagus fibres turned out to soak up lots of water and kept sinking down due to their weight. The second option was to let the still-wet paper sheet dry in a 3D-printed form, but this caused the paper to lose its transparency. They then abandoned 3D printing.

The last option was to slightly wet the dry sheet and then press it over a mould. Meanwhile, De Hoop and Van Veen had developed many sheets to experiment with sizes, transparencies and thicknesses. They started moulding these over makeshift templates. The paper turned out to be more stretchable than initially thought. Using computer software, Van Veen designed and milled various moulds to adapt them to the paper’s capacities. Eventually, a mould was made for a lamp in the form of a disk with room inside for a soft light. 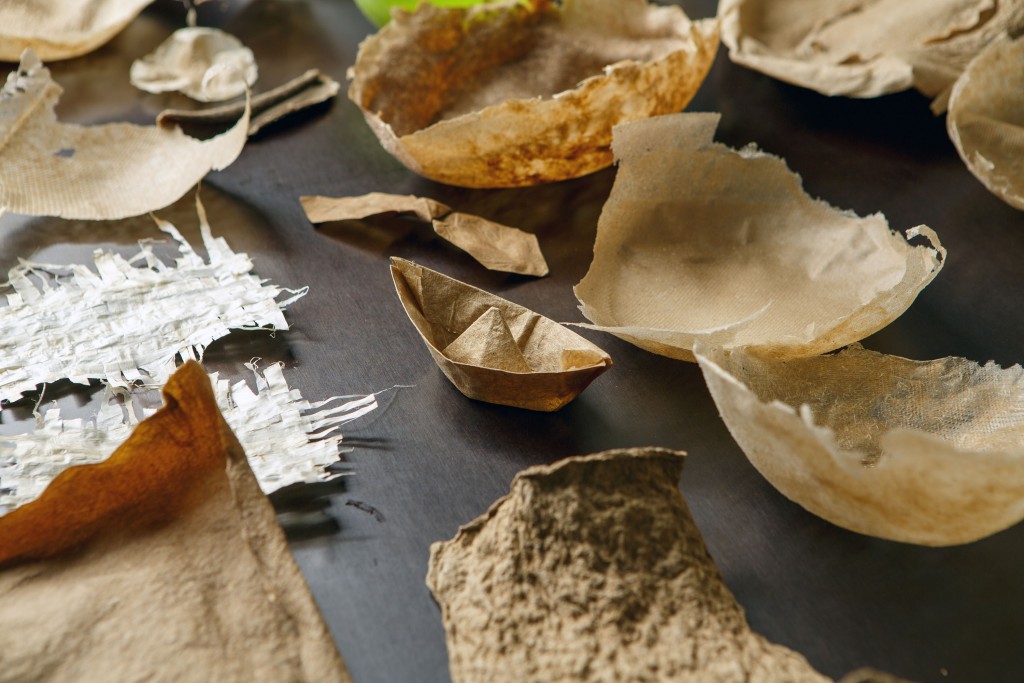 On forehand, I thought one could make products from paper in the same way as from plastic.

Van Veen and De Hoop worked together in almost all aspects of the papermaking process. Their cooperation was not only a dialogue between their working methods, but also their expectations. Van Veen: “On forehand, I thought one could make products from paper in the same way as from plastic: that it would be malleable.” De Hoop, on the other hand, knew paper mainly as a stiff and fragile material that does not like to be pressed into any kind of shape, and had therefore predicted that the paper would tear on the mould. Both were proved right to some extent: although asparagus paper is not particularly elastic, it did prove more stretchable than almost all the other papers that De Hoop had so far encountered. De Hoop: “How it works, I’m not sure. I would like to do more research on that.” 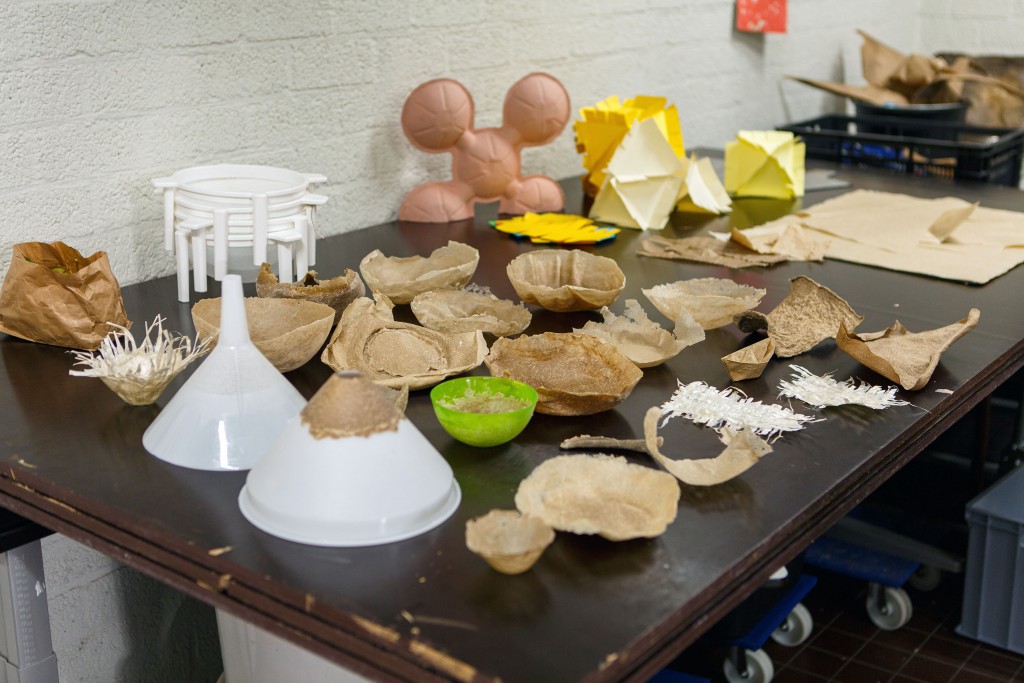 The result of the collaboration is a three-dimensional lamp made from asparagus paper. That result clearly shows how digital technologies can propel crafts forward and add value to them. By asking seemingly impossible things of a craft material from the perspective of digital technology, new properties of the material were discovered. De Hoop was not just surprised by the stretchability of the paper but also by the fact that asparagus fibres absorb so much water. This in turn might make the material suitable, or unsuitable, for other applications.

For his part, Van Veen learned that working with paper requires something different from a designer than plastic, which is the taking into account of the material’s natural behaviour. Although he found working with paper very valuable, he says, the project actually made him respect plastics more. He now finds himself more accepting of the efforts he has to make to source these plastics. 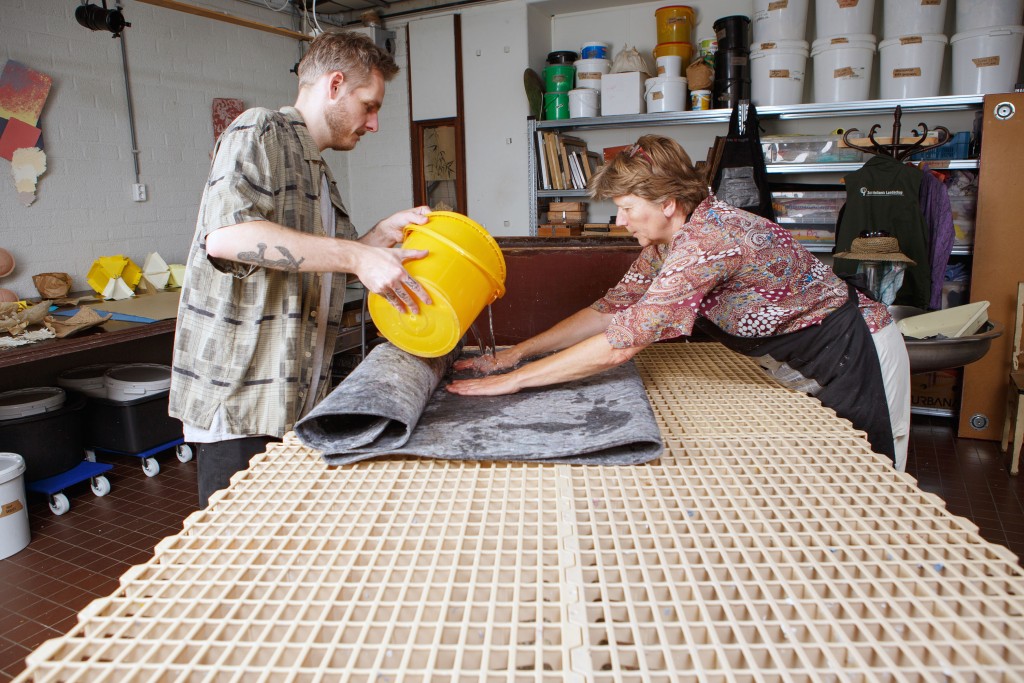 The fact that asparagus paper can be pressed into shape opens up several prospects for the future.

The fact that asparagus paper can be pressed into shape opens up several prospects for the future. For instance, extensive experimentation can be done with other moulds, which can be customised relatively easily and quickly thanks to computer-controlled milling machines. The use of 3D printers could also be explored further, says to De Hoop. The stretchable asparagus paper could perhaps also be suitable for machine-made circular paper objects in the future. For that to happen, a number of steps still need to be taken, De Hoop stresses. For instance, she could never supply enough paper pulp for large-scale production on her own. “For that, a pulp mill in the Netherlands would have to be built first,” she says.