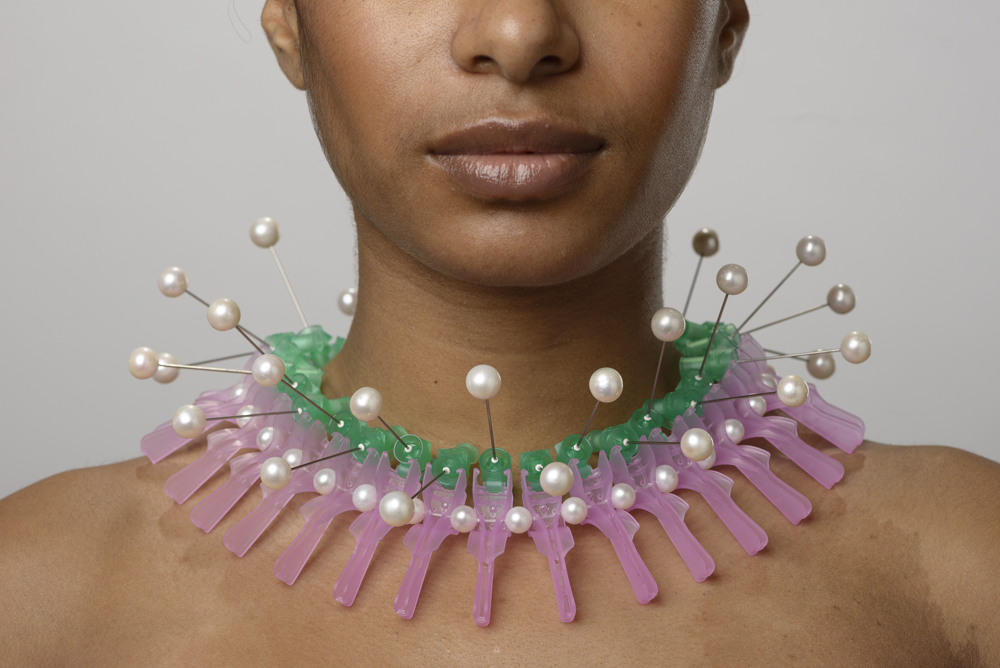 ‘My name is Eva van Kempen and I am a goldsmith with a love for filigree. Filigree is a very complicated technique that was practiced a lot in the Netherlands in jewelry for traditional dress, but is hardly practiced or taught anymore. It is one of the oldest goldsmith specialties in which a relatively large surface is covered with little material. It was already practiced over 4600 years ago in Mesopotamia. Traditionally it was made with a very fine metal wire, mostly precious metal. The word ‘filigree’ comes from the Latin words for thread: ‘filum’ and ‘granum: little balls’. The technique can also be executed with only fine thread (so without little balls). Since 2010 Caroline Giel teaches filigree at the Vakschool Schoonhoven. I followed course 1 and 2. Both courses took around thirty hours. It taught me the base, but nothing more than that.

There is an absolute master of filigree in the Netherlands, Cor Kuijf. He is a 13th generation filigree maker and started when he was 11 (he is now 75 years old). In English there is a nice word for the deep knowledge he has collected: tacid knowledge. Which can best be described as silent knowledge, knowledge attained by doing, knowledge that you inherit from your father, your grandfather, a friend that is passed from generation to generation. Such deep knowledge is hard to achieve without having a family tradition.

From 2007 to 2012 I worked part time in an office and part time as an independent goldsmith. I loved this combination, as I am always alone when I am in my atelier so I missed human interaction sometimes. But because of cuts in the cultural sector I lost my job at the Internationaal Danstheahter, which made me have to focus entirely om jewelry. The past two years I took my Master’s degree, so I was studying again, which I really enjoyed. When I was younger I first wanted to go to art school, but did not dare to take that step. So I studied P&O instead and took a part time education for becoming a goldsmith.’

What can Crafts Council do for you?
’I would love to make use of Craft Council’s extensive network and possibilities for (inter)national collaborations and projects. I would love to shine a light on national treasures. Craftsmen, like Cor Kuijf, have such relevant knowledge that can be of great value for our society.’

More of this entry is available in Dutch